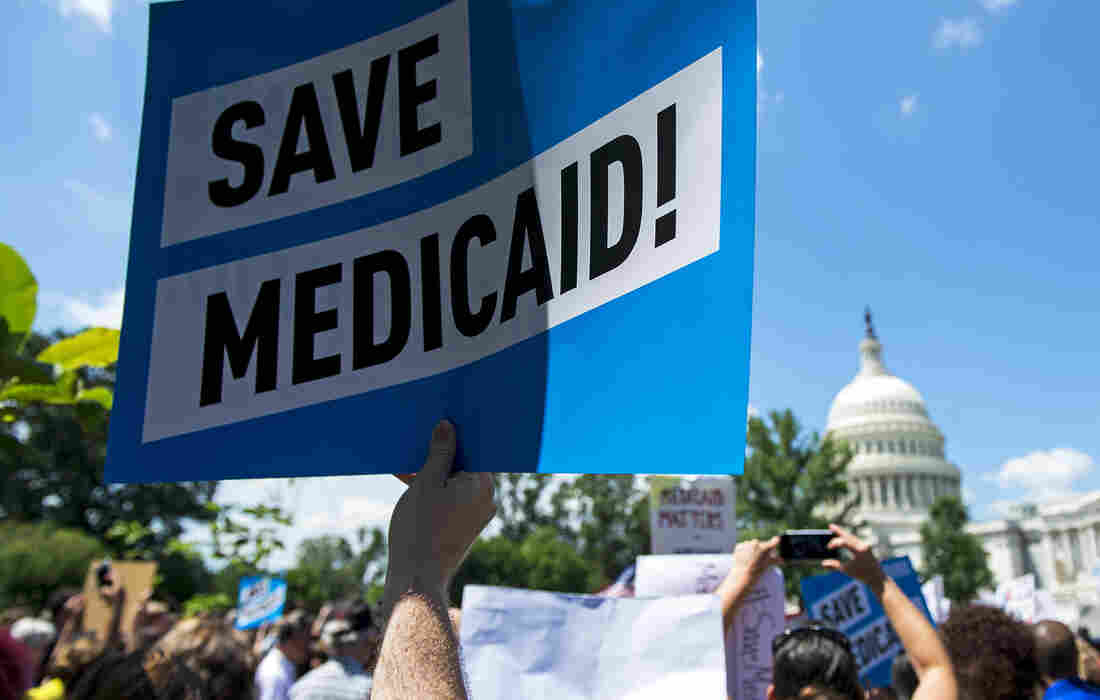 Protesters rally against Medicaid cuts in front of the U.S. Capitol in June. Medicaid is the nation’s largest health insurance program, covering 74 million people — more than 1 in 5 Americans. 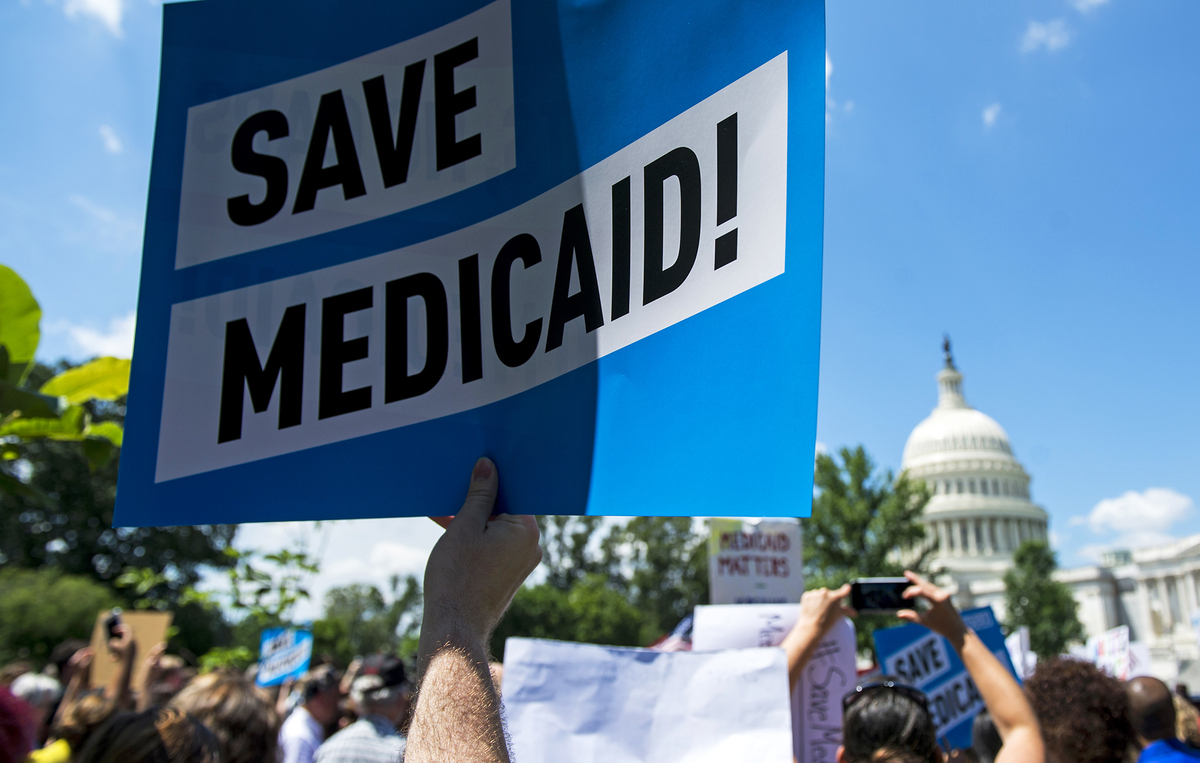 Protesters rally against Medicaid cuts in front of the U.S. Capitol in June. Medicaid is the nation’s largest health insurance program, covering 74 million people — more than 1 in 5 Americans.

When high levels of lead were discovered in the public water system in Flint, Mich., in 2015, Medicaid stepped in to help thousands of children get tested for poisoning and receive care.

When disabled children need to get to doctor’s appointments — either across town or hundreds of miles away — Medicaid pays for their transportation.

The United States has become a Medicaid nation.

Although it started as a plan to cover only the poor, Medicaid now touches tens of millions of Americans who live above the poverty line. The program serves as a backstop for America’s scattershot health care system, and as Republicans learned this year in their relentless battle to replace the Affordable Care Act, also known as Obamacare, efforts to drastically change that can spur a backlash.

The latest Republican proposal — spearheaded by Republican Sens. Lindsey Graham of South Carolina and Bill Cassidy of Louisiana — is being pummeled by doctors, insurers, hospitals and patient advocates because it would scrap the Affordable Care Act’s Medicaid expansion and reduce federal funding for Medicaid.

Senate leaders are trying to get to a vote before Sept. 30, when special budget rules that would allow them to need only 50 votes expire.

Today Medicaid is the nation’s largest health insurance program, covering 74 million people — more than 1 in 5 Americans. Twenty-five percent of Americans will be on Medicaid at some point in their lives — many are just a pink slip away from being eligible.

Medicaid funding protects families from having to sell a home or declare bankruptcy to pay for the care of a disabled child or elderly parent. It covers some aspects of disaster relief, public health emergencies and some programs in schools that lack other sources of funding.

A proposal that would have deeply cut Medicaid passed in a House bill in May, but the ACA overhaul legislation fell short in the Senate in July. “Instead of cutting Medicaid, [lawmakers] increased public awareness of its value and made it even harder to cut in the future,” says Jonathan Oberlander, professor of health policy and management at the University of North Carolina, Chapel Hill and a supporter of the federal health law.

Medicaid is the workhorse of the health system, covering:

Unlike Medicare beneficiaries, who keep that insurance for life, most Medicaid enrollees churn in and out of the program every few years depending on their circumstances, government statistics show.

Such numbers underline the importance of Medicaid, but also provoke alarm among conservatives and some economists who say the U.S. cannot afford the costs over the long run.

Bill Hammond, director of health policy of the fiscally conservative Empire Center for Public Policy in Albany, N.Y., says Medicaid has been a big help for those whom it was designed to cover — children and the disabled. But it has grown so big that the cost hurts state efforts to pay for other necessary public services, such as education and roads. “I can’t think of any other anti-poverty program that reaches so many people,” he says. “It’s too expensive a benefit.”

“We need to transition people to get coverage in the private sector,” Hammond says, noting that millions on the program have incomes above the federal poverty level.

It may be the person down the block

Joana Weaver, 49, of Salisbury, Md., has cerebral palsy and has been on and off Medicaid since birth. For the past few years, it has paid for home nursing services for six hours a day to help her get dressed, bathed and fed. That has kept her out of a nursing home and enabled her to teach English part time at a local community college.

“For me, Medicaid has meant having my independence,” Weaver says.

Medicaid recipients include many grandmothers — one-quarter of Medicaid enrollees are elderly people or disabled adults.

And lots of kids qualify for Medicaid, too. About half of Medicaid enrollees are children, many with physical or mental disabilities

Many of the rest — about 24 million enrollees — are adults under 65 without disabilities who earn too little to afford health insurance otherwise. About 60 percent of nondisabled adult enrollees have a job. Many of those who don’t work are caregivers.

“It’s the mechanic down the street, the woman waiting tables where you go for breakfast and people working at the grocery store,” says Sara Rosenbaum, a health policy professor at George Washington University in Washington, D.C.

While all states rely on Medicaid, it’s used more in some places than others because of varying state eligibility rules and poverty rates. About 44 percent of all New Mexico residents are insured by Medicaid. In West Virginia and California, it’s nearly 1 in 3.

Jane and Fred Fergus, of Lawrence, Kan., say Medicaid has been a cornerstone in their lives since their son, Franklin, was born eight years ago with a severe genetic disability that left him unable to speak or walk. He is blind and deaf on one side of his body.

Although the family has insurance through Fred’s job as a high school history teacher, Franklin was eligible for Medicaid through an optional program that states use to help families let their children be cared for at home, rather than moving to a hospital or nursing home.

Medicaid pays all of the child’s medical bills, Jane Fergus says, including monthly transportation costs to Cincinnati Children’s Hospital, where for the past 18 months, he has been receiving an experimental chemotherapy drug to help shrink tumors that block his airway. The program also covers his wheelchair, walker and daily nursing care at home.

“We have such great health care for him because of Medicaid,” his mother says.

Jane Fergus was never politically active until this year, when she feared that the GOP plans to cut Medicaid funding would reduce services for her son.

“If there is a silver lining in all this debate, it’s that we have been given a voice, and people in power are being educated on the role of Medicaid,” she says.

Moving beyond its roots

Medicaid was born in a 1965 political deal to help bring more support for President Lyndon Johnson’s dream of Medicare, the national health insurance program for the elderly.

Over the past 40 years and particularly since the 1980s, Medicaid expanded beyond its roots as a welfare program. In 1987, Congress added coverage for pregnant women and children living in families with incomes nearly twice the federal poverty level (about $49,200 today for a family of four).

In 1997, Congress added the Children’s Health Insurance Program to help cover kids from families whose incomes are too high for Medicaid.

And since September 2013, Obamacare has allowed states to expand the program to anyone earning under 138 percent of poverty (or $16,394 for an individual in 2016), adding 17 million people to Medicaid’s rolls.

In addition, more than 11 million Medicare beneficiaries also receive Medicaid coverage, which helps them get long-term care and pay for Medicare premiums.

“Medicaid is plugging the holes in our health system,” says Joan Alker, executive director of the Georgetown University Center for Children and Families, “and our health system has a lot of holes.”

But that approach comes at a steep price.

A blessing and a curse

With increasing enrollments and health costs steadily rising, the cost of Medicaid has soared, too. Federal and state governments spent about $575 billion combined on Medicaid last year — nearly triple the level in 2000.

Those dollars have become both a blessing and a curse for states.

The federal government matches state Medicaid spending with funds from Washington, paying from half to 74 percent of a state’s costs in 2016. Poorer states get the higher shares.

The funding is provided on an open-ended basis, so the more states spend, the more they receive from Washington. That guarantee protects states when they have sudden enrollment spikes because of downturns in the economy, health emergencies such as the opioid crisis or natural disasters such as Hurricane Katrina.

The program is the largest source of federal funding to states. And Medicaid is often the biggest program in state budgets, after public education.

“Medicaid is the elephant in the room for health care,” says Jameson Taylor, vice president for policy for the Mississippi Center for Public Policy, a free-market think tank. He says states have become dependent on the federal funding to help fill their state budget coffers. While the poorest states, such as Mississippi, get a higher percentage of federal Medicaid dollars, that still often isn’t enough to keep up with health care costs, he says.

But the revenue stream flows further. Billions in annual Medicaid spending goes to U.S. schools to pay for nurses; physical, occupational and speech therapists; and school-based screenings and treatment for children from low-income families, as well as for wheelchairs and buses to transport kids with special needs.

Medicaid also covers services that private health insurers and Medicare do not — such as nonemergency transportation to medical appointments, vision care and dental care. To help people with disabilities stay out of expensive nursing homes, Medicaid pays for renovations to their homes, such as wheelchair ramps, and for personal care aides.

Rena Schrager, 42, of Jupiter, Fla., who has severe vision problems, has relied on Medicaid for more than 20 years. Although she often has difficulty finding doctors who will accept Medicaid’s reimbursements — which are often lower than those from private insurance or Medicare — she is grateful for the coverage. “When you do not have anything else, you are glad to have anything,” Schrager says.

As it has grown, Medicaid has become more popular — another reason why politicians are cautious to curtail benefits or spending.

A recent survey by the Kaiser Family Foundation indicated that about 75 percent of the public, including majorities of Democrats (84 percent) and Republicans (61 percent), hold a favorable view of Medicaid. That is nearly as high as favorable views on Medicare. (Kaiser Health News is an editorially independent program of the foundation.)

Nonetheless, Medicaid may still have a bull’s-eye on its back.

“The fact that the House passed a bill to cut $800 billion from Medicaid and it came one vote short to passing the Senate shows Medicaid is stronger than maybe many Republican leaders anticipated,” says Oberlander. “But politically, it is still in a precarious position.”

Kaiser Health News is an editorially independent program of the Kaiser Family Foundation. This story launches “Medicaid Nation” — KHN’s series on how Medicaid affects the lives of millions of Americans.

Any Hit To Medicaid Would Take A Broad Swipe Across The US – NPR – NPR
Robert Green September 24, 2017 Medicaid News