The decision marks a major do-over to state cutbacks on the number of insurance plans allowed to do business with Medicaid patients, especially on neighbor islands.

Contracts extending through 2029 totaling $17 billion will be rescinded, and the division is calling for new proposals from health insurance companies. In the meantime, existing contracts will be extended. 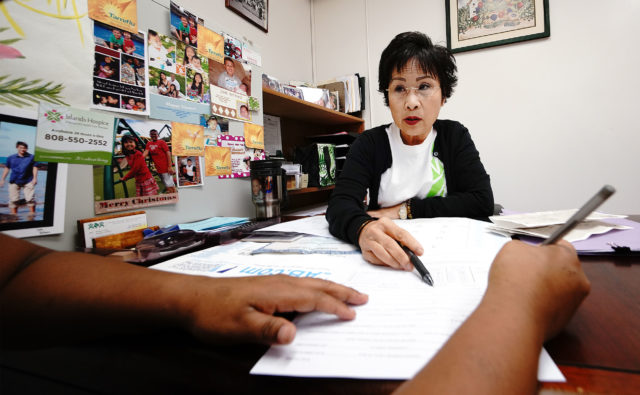 Medicaid eligibility worker Hue Nettrour consults with a patient at Kalihi-Palama Health Center. The economic hit of COVID-19 has led the state Med-QUEST division to revisit its contract plans with health insurance companies.

Med-QUEST Division Administrator Judy Mohr Peterson said the decision was prompted by COVID-19. The agency has seen a swift uptick in health insurance applications as the state economy has tanked during shut-downs instated to prevent the transmission of the virus.

About 24,000 newly eligible people have signed up for the federal and state health insurance program which was created to assist with health care costs for people with limited incomes and resources.

“Some of these individuals are moving, or it’s the first time they’ve been on Medicaid, and others are really concerned about losing their coverage and not being able to access their providers,” said Mohr Peterson.

“We knew it was going to take us some time and effort to be able to do this transition in the right way … to make sure it’s a minimal disruption. Given the pandemic, that wasn’t going to be possible.”

State officials expect the number of applicants to continue to rise as Hawaii’s unemployment rate also climbs. Employment and health insurance are often tied because of a Hawaii law that mandates employers to provide health insurance to employees who work more than 20 hours a week.

The initial contract awards were controversial. The contracts had already been stalled in February by a notice of protest from an insurer and DHS officials suspended the awards process in March because of the pandemic. 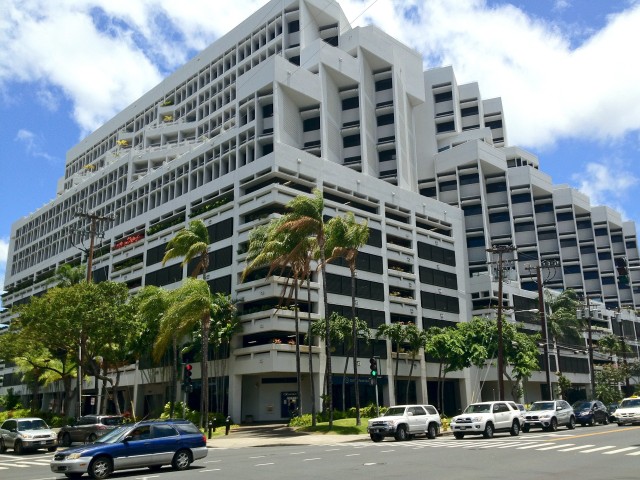 The Hawaii Medical Service Association President and CEO Mark Mugiishi said he was disappointed by the Med-QUEST decision to redo contracts. The HMSA Center, pictured, is located in Honolulu.

When the Hawaii Department of Human Services first announced nine-year contract awards totaling $17 billion in January, it was the first time the division had downsized the number of insurance companies that could insure patients statewide.

Mark Mugiishi, president and CEO of HMSA, said, “While we’re disappointed that the Hawaii Department of Human Services Med-QUEST Division has decided to rescind the award of its statewide contract, HMSA will continue to serve Hawaii’s QUEST members as it has since the program began more than 25 years ago.”

AlohaCare, which would have lost neighbor island contracts under the former plan, will instead continue to provide health insurance to patients across all counties because its current contract was extended. Its interim CEO Francoise Culley-Trotman praised the decision on Friday.

“This was a courageous step that reflects Med-QUEST’s prioritization of public health as its first priority,” she said. “Every sector in Hawaii has been impacted by the coronavirus pandemic, particularly health care on the neighbor islands and rural communities, which already faced provider shortages and additional challenges.”

It’s still unclear whether or not Med-QUEST will stick to awarding two statewide contracts to two companies and two other contracts for Oahu business only.

“That’s one of those things we need to consider,” Mohr Peterson said. “During the Request For Information, we will do that again and listen to the community.”

Sign up for our FREE morning newsletter and face each day more informed.