Marilyn Doocy’s son Marty Matteson has Down syndrome and lives in his own home with assistance paid for by Medicaid. Iowa’s shift to privatized Medicaid is making changes that could leave Matteson without a safe option for staying in his home.

Neal Siegel and his girlfriend, Beth Wargo sit at their kitchen table on Thursday, June 8, 2017, at their home in West Des Moines. A bike accident a few years ago left Siegel with a brain injury. (Photo: Kelsey Kremer/The Register)Buy Photo

The lawsuit alleges that the state’s chaotic shift to a privately run Medicaid program is depriving thousands of Iowans with disabilities the legal right to live safely outside of care facilities. The suit holds Reynolds and her human services director responsible for the private management companies’ actions.

“They are violating very basic human rights, but also very basic Medicaid law, rules and regulations. They’re just totally disregarding them,” said Roxanne Conlin, a Des Moines civil-rights lawyer who helped write the lawsuit. “It’s kind of amazing to see how callous they are toward Iowa’s most vulnerable people.”

The prominent advocacy group Disability Rights Iowa organized the lawsuit against Reynolds and the director of the Department of Human Services. The group wants a federal judge to order the state to halt discriminatory cuts in services to 15,000 Iowans with serious disabilities.

One of the plaintiffs’ first legal steps will be to request that the suit be declared a “class action” on behalf of all disabled Iowans suffering from such cuts.

The 2016 shift to private management of almost all of Iowa’s $4 billion Medicaid program was spearheaded by Reynolds’ predecessor, Gov. Terry Branstad.

That promise was broken within months, with numerous disabled people being told they would receive less help in their homes, the suit says.

Neal Siegel of West Des Moines is one of the lawsuit’s six initial plaintiffs.

Siegel, 54, is a former financial consultant who suffered a devastating brain injury in a bicycle accident in 2013. He uses a wheelchair, can barely speak and needs help with eating, dressing and nearly every other basic life activity.

The managed-care company overseeing his Medicaid benefits, AmeriHealth Caritas, abruptly decided in March to slash payments for his in-home care by more than half, from $7,201 to $3,013 per month.

Siegel needs the in-home care services to “feel like a human,” Wargo said in a recent interview at their home. “He gets to get some of his dignity back.” 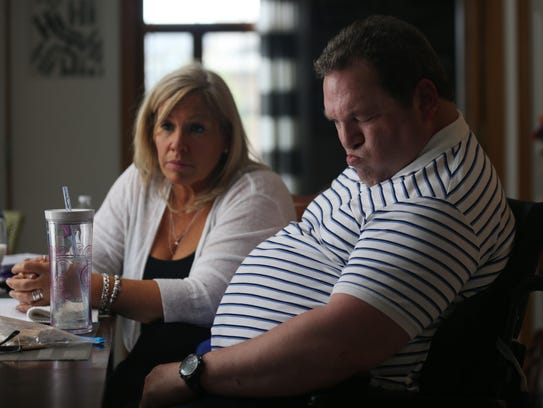 Neal Siegel and his girlfriend, Beth Wargo sit at their kitchen table on Thursday, June 8, 2017, at their home in West Des Moines. A bike accident a few years ago left Siegel with a brain injury.  (Photo: Kelsey Kremer/The Register)

“They’re relying on the families to just roll over, that nobody’s going to say anything,” Wargo said. “They’re hoping nobody responds.”

Amy McCoy, a spokeswoman for the Iowa Department of Human Services, said Tuesday that the department doesn’t comment on pending legal cases.

Reynolds’ spokeswoman, Brenna Smith, said the governor’s office had not yet reviewed the lawsuit as of Tuesday afternoon. The staff remains “committed to ensuring the most vulnerable Iowans get the right care,” she said.

Disability Rights Iowa is a federally supported advocacy group that seeks to protect the rights of people with disabilities. Its leaders said they decided to seek a class-action lawsuit after facing a stream of Medicaid recipients seeking assistance with individual appeals.

Another of the six initial plaintiffs is Marty Matteson, a 39-year-old Webster City man with Down syndrome, sleep apnea, high blood pressure, depression and knee problems.

Matteson has lived independently in a duplex since 2010. Before that he lived a decade in a group home.

AmeriHealth on March 1 said it was reducing his daily payments for care by 37 percent, from $274 to $173. As in Siegel’s case, the reason given was the expenses were over limits set in state policy.

The cut means Matteson’s 70-year-old mother and guardian, Marilyn Doocy, must decide whether to let go some of the seven staff members who provide a total of 13 hours of care each day or try to reduce expenses in other areas of his care. 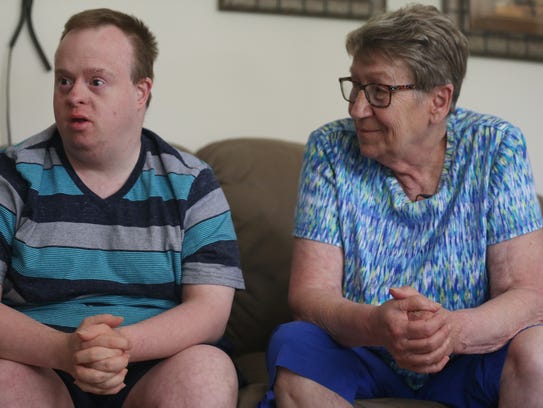 Doocy has filled some of the shifts herself without pay and has used some of her son’s savings to cover the difference for the other workers. She and Matteson fear he will be forced to return to a group home if their appeals fail.

Doocy said an AmeriHealth employee who helps manage Matteson’s case recommended the family cut staff hours by placing alarms on the doors of his duplex to alert officials if Matteson were to leave his home, rather than having a night staff person in the house, Doocy said.

The AmeriHealth caseworker also recommended a lock be placed on the refrigerator so Matteson wouldn’t overeat when staff members weren’t at his home, his mother said.

Doocy said she rejected the denigrating suggestions before asking the AmeriHealth caseworker to leave her son’s home.

Marty Matteson, of Webster City picks out produce with the help of his staff, Rolanda Burgin, at Hy-Vee on Tuesday, June 6, 2017, in Webster City. Matteson, who has down syndrome, does tasks like cooking and shopping for groceries with the assistance of a staff.  (Photo: Kelsey Kremer/The Register)

“This (lawsuit) isn’t just important to Marty, it’s important to all the people who are experiencing the kinds of problems Marty is experiencing,” Doocy said. “And maybe they don’t have somebody who is going to bat for them.”

The suit’s claims of wrongdoing include that the management companies are forcing many people with disabilities to have their care reauthorized every 90 days instead of annually.

Having to go through that process repeatedly adds stress to people who constantly have to worry that their benefits will be cut, the suit says.

The lawsuit says Iowa is violating federal laws and a 1999 U.S. Supreme Court decision declaring that disabled Americans have a right to live as independently as possible.

The suit says the managed-care companies running Iowa’s Medicaid program have “engaged in a pattern and practice” of cutting payments to care providers without regard to whether those cuts will lead to reduced services that people with disabilities rely on.

“The managed care companies are saying, ‘Well, the providers can just be more efficient.’ But we really feel like it’s not being based on the actual needs of individuals,” said Jane Hudson, executive director of Disability Rights Iowa.

The lawsuit asks that a federal judge order the state to stop letting its contractors arbitrarily deny or cut services allowing Iowans with disabilities to live in their homes.

The group’s lawyers considered adding the three managed care companies as defendants in the lawsuit, but they said they decided it would be simpler to focus the case against the state, which has ultimate authority over how Medicaid is run.

Hudson said one possible outcome could be to have the state stop using management companies to oversee the care for 15,000 recipients who are on “waiver” programs for people with serious disabilities.

She said the state Department of Human Services could resume direct oversight of benefits for those people, who have some of the most complicated needs of any of the approximately 600,000 Iowans on Medicaid.

The lawsuit says when state administrators directly ran the Medicaid program, they often granted “exceptions to policy,” allowing service levels that were beyond what formal rules called for.

But the three private management companies have arbitrarily clamped down on such exceptions, the lawsuit says.

That’s what Wargo says happened in her boyfriend’s case. During an interview last week, she showed a copy of AmeriHealth’s March letter saying payment for his in-home services would be slashed by more than half.

The new amount, which is under appeal, would pay for only four hours per day of in-home care for a man who needs someone with him at all times, Wargo said.

As Wargo explained the couple’s plight, Siegel sat beside her in his wheelchair, with his head hanging down. As she spoke, he moaned, grunted, shed tears and made occasional attempts to write words with a marker on a notebook.

At one point, he scrawled the word “Eek,” then yelled and repeatedly banged the marker  into the paper in apparent frustration over his inability to communicate.

Siegel became upset again as his girlfriend speculated in the interview that the managed-care company would prefer he be put back into a nursing home, possibly out of state, even though such care would be more expensive. She put her arm around him to calm him.

A few minutes later, she looked in the eyes of her now-calm boyfriend. “I love you pretty much, don’t I?” she asked him.

He nodded, then with her coaxing, squeezed out the words, “I love you.”

Wargo reflected later on the fact that the lawsuit doesn’t seek any monetary award beyond attorneys’ fees. That’s fine, she said.

Hudson, Disability Rights Iowa’s leader, said she hopes the lawsuit leads to negotiations instead of a trial.

Hudson said similar agencies in other states, including California,Minnesota,North Carolina and Oregon, have successfully used federal lawsuits to prevent or reverse cuts in Medicaid financed services to people with disabilities.