A federal judge has sentenced a former Polk County Schools counselor to spend the next two years in prison for using student information to obtain more than $435,000 in fraudulent Medicaid reimbursements. 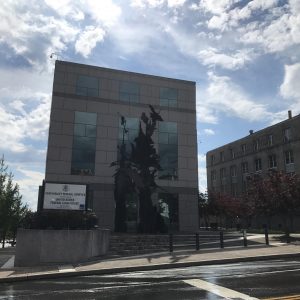 U.S. District Judge Martin Redinger, who is based at the federal courthouse in Asheville handed down a sentence in the case of former school counselor Joseph Korzelius of Polk County on Thursday. Michael Gebelein / Carolina Public Press

The U.S. District Attorney’s Office for the Western District of North Carolina announced on Friday that Tryon resident Joseph Frank Korzelius, 47, will have to repay $436,229.08 to Vaya Health, which administers Medicaid funds in much of WNC. In addition to the federal prison time and financial penalty, U.S. District Judge Martin Reidinger ordered Korzelius to serve three years of supervised release following his prison term.

Polk County Schools superintendent Aaron Green told Carolina Public Press in June, when Korzelius entered a guilty plea in federal court to one count of health care fraud, that the school wasn’t aware of the federal investigation into Korzelius until the U.S. Department of Justice announced the guilty plea. The schools fired Korzelius from his job the same day. Greene said in a statement in June that the school system didn’t believe any student information was at risk, and reiterated that point in a conversation with CPP on Friday.

“It appears that Mr. Korzelius needed only directory information like names and addresses to generate claims for his personal business,” Greene said in June. “All indications are that these activities were limited to Medicaid-eligible students and families, and involved only the secure Medicaid automated billing system.”

Federal prosecutors said in a press release Friday that Korzelius ran a private counseling practice, Western Carolina Counseling Services, in addition to serving as a guidance counselor at Tryon Elementary School. Through his work at the school, Korzelius obtained student information that he used to file more than $450,000 in fraudulent claims for behavioral health services that students and their families never sought and Korzelius never provided. Prosecutors said Korzelius operated the scam for more than three years, from October 2013 to November 2016.

Schools initially in the dark

At the time of Korzelius’ arrest and plea in June, the superintendent expressed concern that the schools were blindsided by calls from the news media.

Discussing the situation Friday, Green told CPP that he understands that the lack of timely information the Department of Justice provided to the schools at the time of the original arrest was due to federal protocols and because the crime related more closely to Korzelius’ private practice, rather than his work for the schools.

That being said, Greene described having a “good conversation” with a Department of Justice officials in which he asked for the courtesy of a heads up at least at the same time announcements go out to the news media the next time something like this happens.

Greene added, that he certainly hopes there will never be a next time for a case like this.