Like Idaho and Nebraska, Utah voters supported a November 2018 ballot measure to adopt the full Medicaid expansion as set out in the Affordable Care Act (ACA). Utah voters approved a full ACA expansion to cover nearly all adults with income up to 138% of the federal poverty level (FPL, $17,236/year for an individual in 2019), an April 1, 2019 implementation date, and a state sales tax increase as the funding mechanism for the state’s share of expansion costs. By implementing a full ACA expansion, Utah would qualify for the substantially enhanced (93% in 2019 and 90% in 2020 and thereafter) federal matching funds. The expansion population in Utah includes childless adults ages 19-64 with income from 0 to 138% FPL and parent/caretakers ages 19-64 with income from 60% to 138% FPL. The fiscal note from the ballot initiative estimated that approximately 150,000 newly eligible individuals would enroll in Medicaid in fiscal year 2020. However, Utah is one of 11 states (out of the 21 states that allow state laws to be adopted via a ballot initiative) that have no restrictions on how soon or with what majority state legislators can repeal or amend voter initiated statutes.


Voters in Utah approved a measure in November calling for a traditional ACA Medicaid expansion. State lawmakers had other plans, passing legislation for a more limited expansion that includes an enrollment cap and work requirements. See our explainer:

The Utah legislature significantly changed and limited the coverage expansion that was adopted by the voters. Governor Herbert signed Senate Bill 96 into law on February 11, 2019. The state released an implementation toolkit that follows the legislation in calling for multiple steps to implement an expansion of Medicaid coverage to adults in ways that differ from a full ACA expansion (Figure 1). 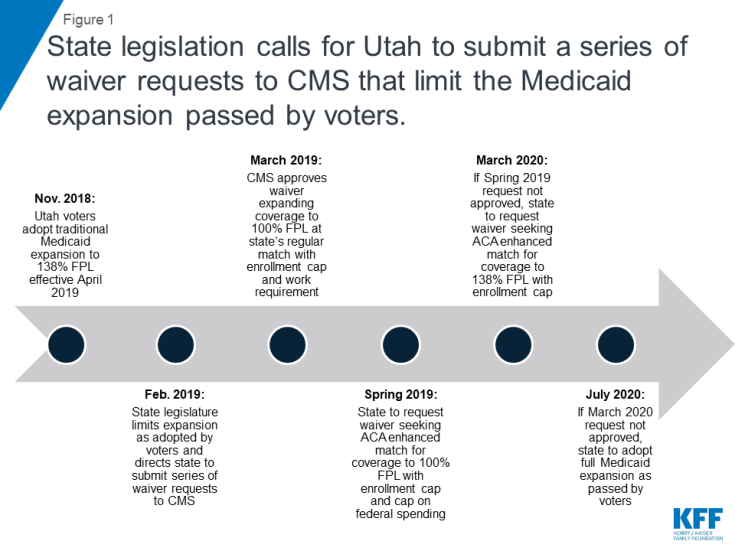 Figure 1: State legislation calls for Utah to submit a series of waiver requests to CMS that limit the Medicaid expansion passed by voters.

On March 29, 2019, CMS approved an amendment to Utah’s existing Section 1115 demonstration waiver to expand Medicaid to a capped number of adults with income up to 100% FPL beginning on April 1, 2019 at the state’s regular Medicaid matching rate, not the enhanced ACA matching rate. The authority to cover this “Adult Expansion Population” expires on January 1, 2021. The Adult Expansion Population under the waiver includes childless adults ages 19-64 with income from 0 to 100% FPL and parent/caretakers ages 19-64 with income from 60% FPL to 100% FPL, a more limited coverage expansion than the 138% FPL approved by the voters (Figure 2). The state estimates that approximately 70,000 to 90,000 people will be covered under the waiver with financial eligibility limited to 100% FPL, about 40,000 fewer compared to a full ACA expansion to 138% FPL. 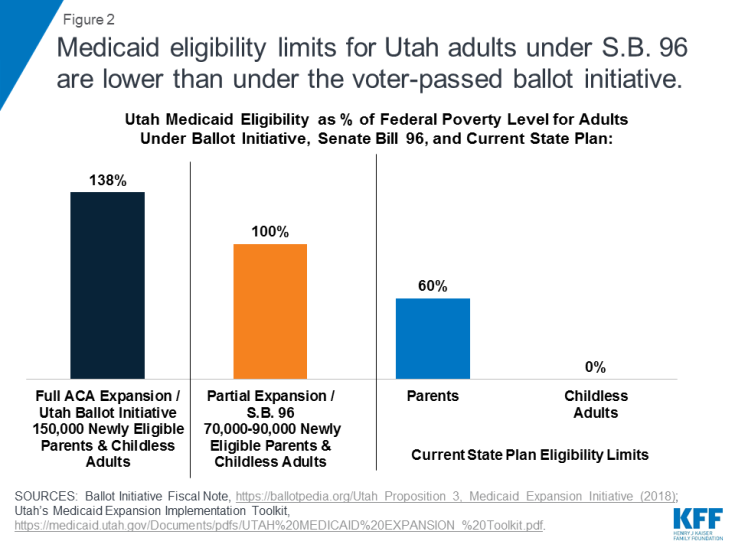 Figure 2: Medicaid eligibility limits for Utah adults under S.B. 96 are lower than under the voter-passed ballot initiative.

Instead of the 90% enhanced federal matching rate tied to newly eligible adults under a full ACA expansion, Utah is receiving its current, traditional federal matching rate of 68%, which will result in higher state costs for expanding coverage to 100% FPL instead of a full expansion to 138% FPL (Figure 3). Utah refers to the March 2019 waiver amendment as the “Bridge Plan” because the state will seek further waiver amendments as required by Senate Bill 96 and described in the text below. Utah’s pre-ACA coverage expansion, authorized by its waiver prior to the Bridge Plan amendment, is described in Box 1 below. 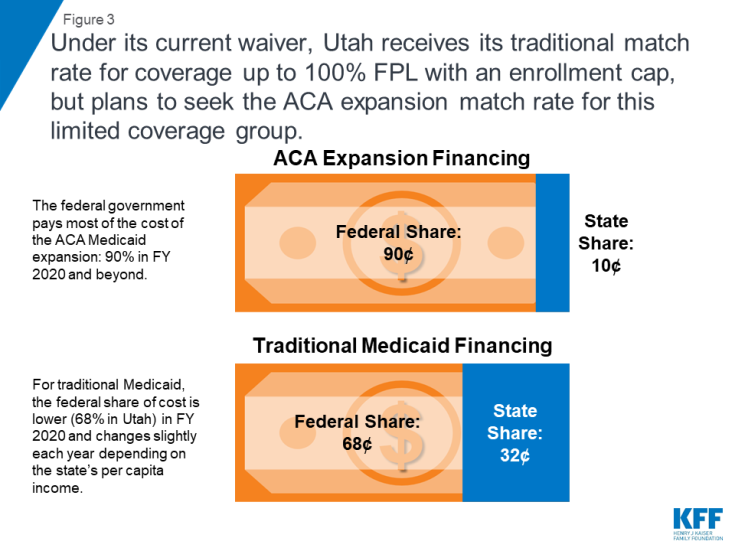 Figure 3: Under its current waiver, Utah receives its traditional match rate for coverage up to 100% FPL with an enrollment cap, but plans to seek the ACA expansion match rate for this limited coverage group.

Utah’s amended waiver includes an enrollment cap to be imposed at state option on the Adult Expansion Population, meaning that not all eligible people may be able to enroll in coverage. The waiver allows the state to close enrollment for the Adult Expansion Population, which could limit enrollment further than the coverage estimates noted above. The waiver does not specify a pre-determined maximum number of people to be covered but instead allows the state to stop enrolling eligible people “if projected costs exceed state appropriations.” If the enrollment cap is reached, the state will not maintain a waiting list; instead, eligible individuals will have their applications denied and will have to reapply for coverage when enrollment re-opens. Consequently, individuals who apply at the beginning of a state fiscal year could be more likely to gain coverage than those who apply later in the fiscal year, even though they are otherwise eligible, if the state imposes the enrollment cap. Individuals with lower incomes or higher needs, compared to those already enrolled, might be barred from enrolling in coverage as a result of the timing of their application due to the enrollment cap. No other state currently has approval for an enrollment cap on adults who are eligible under the ACA Medicaid expansion. As explained in Box 1, enrollment caps are no longer necessary to ensure federal budget neutrality because the ACA now allows states to access federal Medicaid funds for this coverage directly through the creation of the new adult eligibility pathway and the availability of federal matching funds.

Box 1: Coverage Expansion Under Utah’s Waiver Prior to the ACA

In 2014, the ACA for the first time authorized federal Medicaid matching funds for coverage for nearly all nonelderly adults. Prior to 2014, federal Medicaid funds only could be used to cover pregnant women, parent/caretakers, children, seniors, and people with disabilities. Adults without dependent children were ineligible for Medicaid, no matter how poor they were. Before the ACA, some states used Section 1115 waivers to establish coverage expansions beyond the limits of federal law. Because federal Medicaid funds could not be accessed directly to cover these adults, these waivers included provisions to generate savings to fund coverage expansions, such as limited benefit packages, premiums, and/or mandatory managed care enrollment, and sometimes enrollment caps as a way to limit federal spending and ensure federal budget neutrality. However, budget neutrality is no longer a consideration for such coverage expansions under waivers now that federal Medicaid law, as amended by the ACA, includes an eligibility pathway and allows states to receive federal Medicaid matching funds to cover nearly all nonelderly adults, including those without dependent children, up to 138% FPL without the need for a waiver.

Utah’s existing Section 1115 waiver was first approved in 2002, and included a pre-ACA coverage expansion (called the Primary Care Network, PCN) to parents with income above the state plan limit (60% FPL) and childless adults (for whom no state plan coverage was available). As of March 2019, the PCN income limit was 100% FPL. The PCN coverage expansion provided a limited benefit package of primary and preventive services to a capped number of these adults and was funded by reduced benefits for traditional low-income (categorically and medically needy) parents. The March 2019 waiver amendment suspends authority for Utah’s pre-ACA PCN coverage expansion and moves the 17,500 parents and childless adults in the PCN group as of March 2019 to the new “Adult Expansion Population” (described in the text above) effective April 1, 2019.

Utah’s amended waiver also includes a work requirement as a condition of eligibility for the Adult Expansion Population, beginning no sooner than January 1, 2020. In Utah, individuals subject to the work requirement must complete certain activities within the first three months of each 12-month eligibility period or qualify for an exemption. Those who fail to do so will lose coverage for the rest of the year or until they fulfill the requirement. Required activities include registering for work through the state’s online system, completing an online employment training needs assessment, completing online job training modules identified through the assessment, and applying for work with at least 48 potential employers.

Senate Bill 96 calls for Utah to submit a subsequent Section 1115 waiver amendment proposal that includes a request to receive the 90/10 ACA enhanced match for coverage up to 100% FPL subject to an enrollment cap. This “Per Capita Cap Plan” is expected to be submitted to CMS in the spring of 2019. The Per Capita Cap Plan would continue provisions in the Bridge Plan (coverage up to 100% FPL, an enrollment cap, and a work requirement), and add 12-month continuous eligibility, coverage lock-outs for unspecified program violations, housing supports, elimination of hospital presumptive eligibility, and a per capita cap on federal funds. The state legislation does not explain how such a per capita cap would operate other than to say that it would include an annual inflationary adjustment, account for “differences in cost among categories of Medicaid expansion enrollees,” and provide “greater flexibility to the state than the current Medicaid payment model.”

If CMS does not approve the Per Capita Cap Plan by January 1, 2020, the state will submit another waiver amendment request seeking authority for a coverage expansion up to 138% FPL with the ACA enhanced matching funds and an enrollment cap. This “Fallback Plan” also would include coverage lockouts for unspecified program violations and elimination of hospital presumptive eligibility. The Fallback Plan would continue the work requirement but would not seek a per capita cap on federal funds.

If the Fallback Plan is not approved by July 1, 2020, the state will adopt the full Medicaid expansion as set out by the ACA and approved in the ballot initiative. This would include coverage of all eligible adults up to 138% FPL at the ACA enhanced matching rate and would use a state plan amendment instead of waiver authority. It would not include a work requirement or enrollment cap as proposed in the waiver proposals described above.

From Ballot Initiative to Waivers: What is the Status of Medicaid Expansion in Utah?
Robert Green May 9, 2019 Medicaid News