The upcoming unwinding of the Medicaid continuous coverage requirement—which kept millions of Americans on Medicaid despite potential changes in eligibility—represents the single largest health care coverage transition event since the first open enrollment period of the Affordable Care Act. Hundreds of thousands of Georgians who have had uninterrupted access to affordable health care may lose Medicaid eligibility once the COVID-related public health emergency (PHE) expires and the continuous coverage requirement ends. Although most of those who lose Medicaid eligibility will be eligible for other forms of coverage, the sheer volume of renewals that must be processed by the Department of Community Health and Division of Family and Children’s Services means that additional action, including potential legislative action, may be needed to ensure a smooth transition and avoid unnecessary losses in health care coverage, particularly for Black and Latinx children and adults.

Georgia, like all states, has received more federal money for Medicaid and has not been allowed to disenroll anyone since March 2020. Prior to the pandemic, Medicaid renewals were conducted at least once a year to determine if the person still met eligibility requirements. A person might lose their eligibility, for example, because of a change in income, a move to a different state or the end of a pregnancy. At the beginning of the COVID-19 pandemic, the Families First Coronavirus Response Act authorized enhanced federal funding (a 6.2 percent increase) for state Medicaid programs if states met specific requirements, including a requirement that eligibility renewals be suspended and enrollees be provided continuous coverage. Between the outset of the coverage requirement in March 2020 and December 2021 (the most recent enrollment data available at the time of analysis), total enrollment in Medicaid and Children’s Health Insurance Program (CHIP) in Georgia grew by 24 percent among all enrollees and by almost 25 percent among children.[1]  The benefits of more people getting access to affordable health care are clear. As more Georgians gain Medicaid coverage, particularly continuous coverage, it can lead to better health and more financial stability for Georgia’s families. 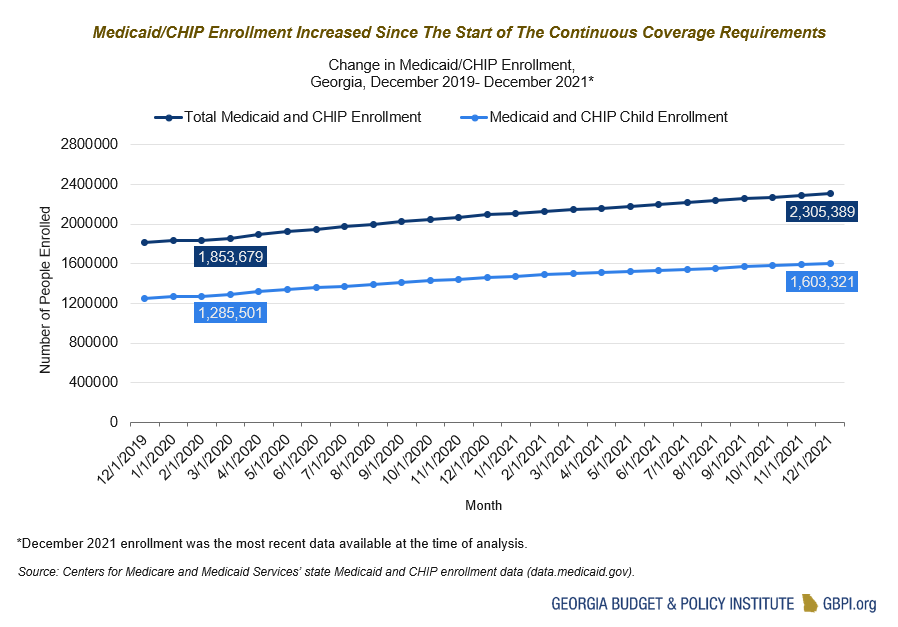 Thousands Of Georgians Are at Risk of Losing Medicaid Coverage

The number of Medicaid enrollees in Georgia could decline significantly after the PHE expires; however, estimates of how many Georgians might be affected vary, as shown below. According to a January 2022 survey, the Georgia Department of Community Health estimates that about 11 percent of Medicaid enrollees will be determined ineligible when the continuous coverage requirement ends with the anticipated primary reason being a change in circumstances. Using the most recent enrollment data available, an 11 percent disenrollment rate would result in 245,098 children and adults under the age of 65 losing Medicaid eligibility.

However, other estimates predict a higher loss of coverage. The Medicaid and CHIP Payments and Access Commission (MACPAC) estimates that about 24 percent of adults under the age of 65 and about 19 percent of children across the United States were disenrolled in 2018. Applying this national pre-pandemic disenrollment rate to the most recent enrollment data available, we estimate that about 304,631 children and 149,962 adults under the age of 65 in Georgia would lose Medicaid coverage—either due to ineligibility or due to procedural reasons. It is important to note that, based on that same MACPAC analysis, almost half of those children (44 percent) and almost a third of those adults (32 percent) could potentially re-enroll in Medicaid within 12 months of losing coverage.

According to an analysis by Urban Institute, most people who become ineligible for Medicaid coverage may be eligible for other forms of health care coverage. For adults, that means a transition to either employer-based coverage or Marketplace subsidies. For children, that means a transition to CHIP, their parents’ employer-based coverage, or Marketplace subsidies.

Some people may be at risk of becoming uninsured for several reasons: 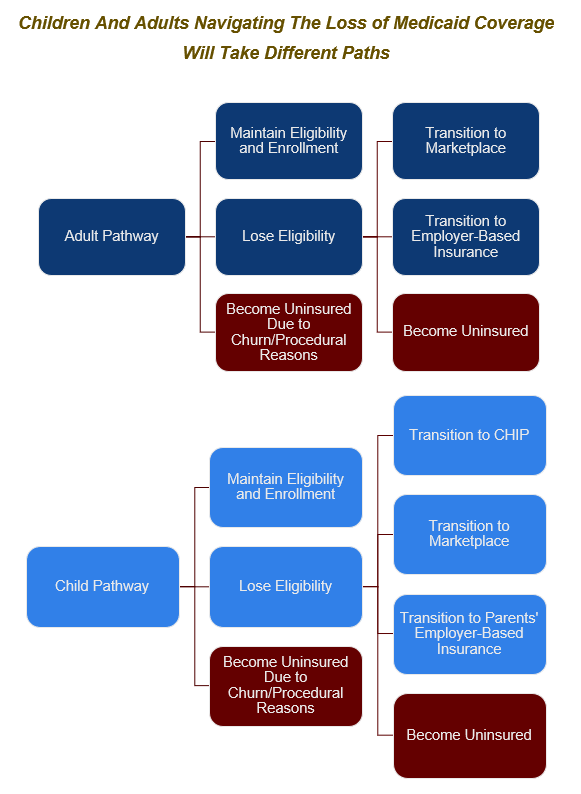 Source: Based on information from Urban Institute and Georgetown University Health Policy Institute.

Because low-income Black and Latinx people are overrepresented in Medicaid in Georgia, the end of the continuous coverage requirement will have a larger impact on those communities. Prior to the pandemic, about 7 percent of Black adults under 65 and 2 percent of Hispanic adults under 65 in Georgia were enrolled in Medicaid compared with about 4 percent of white adults. About 47 percent of Black children and 42 percent of Hispanic children were enrolled in Medicaid/CHIP compared with about 20 percent of white children.[2] Given the lingering effects of pandemic-era job loss on Black and Latinx communities in Georgia, it is possible that those disparities have increased during the continuous coverage period. A higher rate of income volatility and its effects like housing insecurity—that are due in large part to inequities brought by a history of racist policies and systems—also put Black and Latinx families at greater risk for a temporary loss of coverage for procedural reasons. For example, renewal paperwork may be sent to the wrong address due to pandemic era moves that were not reflected in the state agencies’ information systems.

Children overall, who represent about 69 percent of all Medicaid/CHIP enrollment in Georgia according to the latest enrollment data, may also be at particular risk for unnecessary loses in coverage. In fact, an analysis from Georgetown University’s Health Policy Institute found that Georgia is one of six states where children are most at risk for losing their coverage. Certain structural issues mean that children enrolled in Medicaid may experience a temporary loss in coverage. For example, Georgia has a separate Medicaid and CHIP program, which, among other factors, means higher premiums for children ages 6 and older who transition to CHIP. In addition, Georgia does not provide 12 months of continuous coverage for children in Medicaid, which would allow children to remain enrolled for a full year and eliminates coverage gaps due to fluctuations in income. In 2021, Georgia signed a bill into law that would create express lane eligibility, which would allow state agencies to verify a child’s eligibility based on data from other public benefit programs—relieving the paperwork burden on families and making it easier for certain uninsured children in Georgia to enroll and maintain continuous coverage. However, the state plan amendment for express lane eligibility has not yet been submitted to the federal government for approval and thus the program is not yet operating. 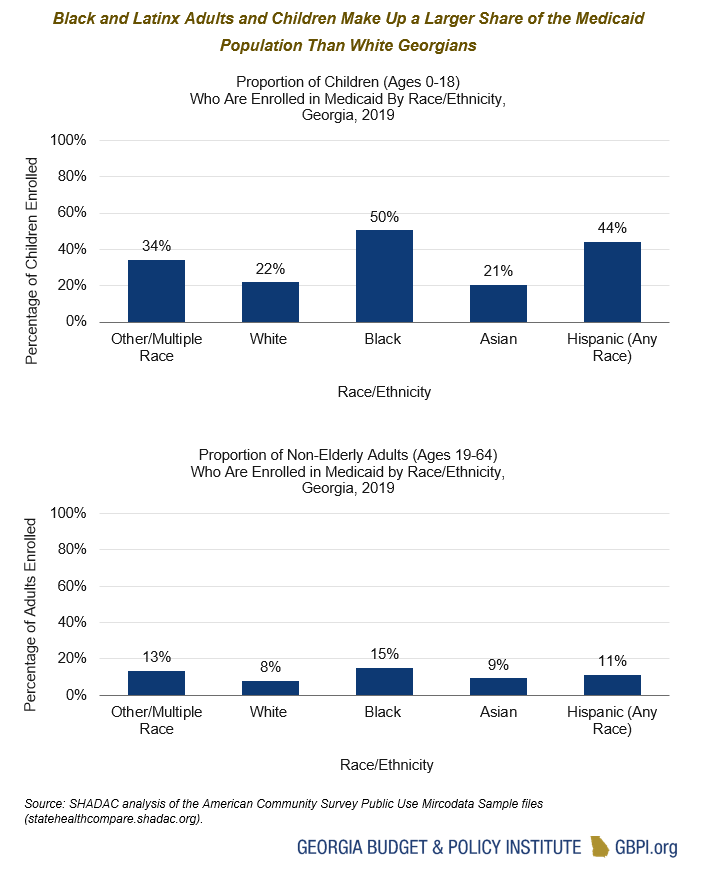 As we work as a state to ensure continuity of coverage and minimize unnecessary coverage loss, there are important issues to consider.

Lack of certainty around timing

The PHE is currently set to expire on July 15, 2022, which means the continuous coverage requirement would end on July 31, 2022 and the first disenrollments would take effect on August 1, 2022. Although it is unclear if the PHE will be extended again, the Administration has promised to give a 60-day notice to states. According to the most recent guidance from Centers for Medicare and Medicaid Services (CMS), states can take may take up to 12 months to initiate renewals for all enrollees in their caseloads (and up to two additional months to complete renewals for a total of 14 months). According to a January 2022 survey, Georgia plans to take at least 9-12 months to process redeterminations.

Processing Medicaid eligibility determinations happened on a regular basis prior to the pandemic. However, Georgia, like all states, will be facing a massive volume of redeterminations that need to be completed within a 14 month period, which increases the risk that eligible individuals will be erroneously determined ineligible or lose coverage for avoidable procedural reasons. For this reason, CMS has provided guidance that states initiate no more than one-ninth of their total caseload per month. According to a January 2022 survey, Georgia plans to adopt a time-based approach to prioritize eligibility renewals. That means Georgia will prioritize actions based on the month of an enrollee’s initial application or last renewal or based on the time since the individual/household’s last redetermination of eligibility.

Increased state costs due to loss of enhanced federal match

Although Georgia has up to 14 months to complete all renewals for enrollees, the enhanced federal match is only in place until the end of the quarter in which the PHE ends. For example, if the PHE ends in July, the additional federal funding would dry up after September 30—placing an additional burden upon the state budget.

Like most states across the county, existing workforce shortages brought by the pandemic may impact how well the state is able to effectively process the high volume of eligibility determinations while ensuring continuity of coverage. According to a January 2022 survey, Georgia does have plans to increase eligibility staff capacity.

Georgia state legislators, state agencies, managed care organizations, community-based organizations and others can work together to avoid a large increase in the number of people who are uninsured after the PHE ends. In particular, action should be taken in the planning and implementation that centers the needs of low-income Black and Latinx families who are overrepresented in Medicaid. Below are some examples of how state lawmakers and state agency leadership can take action.

State agencies, including Department of Community Health in conjunction with the Division of Family and Children’s Services and the state’s Medicaid managed-care organizations, should be transparent in the development and implementation of their operational plan for the end of the continuous coverage requirement and work with community-based organizations and other stakeholders before the PHE expires and throughout the process to ensure that plan meets the needs of those who will be most disproportionately impacted. State agencies also should publicly report and post key metrics over the course of the disenrollment period, including call center statistics and the share of disenrollments due to procedural reasons.

State legislators can take action to help Georgians keep access to affordable health care. During the pandemic, Georgia adopted continuous coverage for children covered by both Medicaid and the separate CHIP program, and they should continue that after the PHE expires. Legislators should consider legislation that authorizes the Department of Community Health to begin offering continuous coverage for children. Under this option, states can allow children to stay enrolled in Medicaid and CHIP for 12 months regardless of changes in their families’ income. Currently, 32 states provide 12-month continuous eligibility for all children in Medicaid and/or CHIP, and states like Alabama, Louisiana and North Carolina have adopted it for both. During the pandemic, Georgia also waived premiums for its separate CHIP program, which is another policy that benefits children and families and should be made permanent once the pandemic ends. Data indicate that state savings from CHIP premiums are limited, but the impact on families’ ability to enroll and maintain coverage are significant. Legislators should consider legislation that calls for the elimination of CHIP premiums.

State legislators should also consider the budgetary impact of the end of the continuous eligibility requirement. Given the historic number of renewals that will need to be completed over the course of the 14-month unwinding period, state agencies and their partners may need additional resources to support workforce capacity as well equitable outreach to consumers to ensure either renewal or transition to a new form of coverage goes smoothly (e.g., renewal forms and notices that are accessible for enrollees with limited English proficiency or with disabilities). In addition, considering the loss of the enhanced federal match that will happen soon after the PHE expires, increased state funding for Medicaid will need to be reflected in upcoming budgets. Working together, we ensure that Georgians in low-income communities maintain the access to affordable, high-quality health care that they deserve.