The Affordable Care Act is still the law of the land. A viable repeal-and-replace effort may or may not be forthcoming in Congress, but until one materializes the provisions of the ACA remain in effect, and the Trump administration is bound by law to enforce them.

But the administration has made little secret of the fact that it does not want to enforce them—especially not the pieces that will tend to erode political support for repeal. Many of the 19 Republican-led states that have resisted the ACA’s expansion of Medicaid to low-income healthy adults, struggling with public-health issues like the opioid crisis and enticed by ample federal funding, are now reconsidering their involvement. And the Trump White House appears desperate to do what it can to stop them. 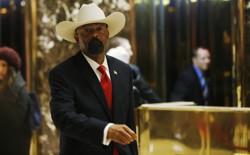 Most states waited to see some kind of resolution to the ongoing congressional debate over the American Health Care Act, the Republican Obamacare replacement, but inter-caucus dithering and the lengthening odds of any reform passing the Senate have spurred some states to action. So far, that action has been unkind to Medicaid expansion proponents. In mid-March, the Idaho Senate rejected a Democratic plan to extend Medicaid coverage for some of the sickest uninsured people. In one of the most conservative states in the country, in early April, the Kansas House fell just three votes short of overriding a veto by Governor Sam Brownback of the legislature’s Medicaid expansion plan. An expansion plan by Virginia Governor Terry McAuliffe also failed before the state legislature in April, and despite political pressure to act, Georgia and South Dakota both failed to advance Medicaid expansion plans through their legislatures.

Still, the resistance among Republican-controlled state governments appears to be loosening. Kansas may still muster the votes to override the governor’s veto, and health-infrastructure challenges and hospital closings in Georgia seem likely to force the state’s hand. Nebraska is also seriously considering a Medicaid expansion bill, and the general volatility of the national health-care discussion seems to be at least encouraging states to consider accepting Obamacare funds for expanding Medicaid. Seema Verma, the new administrator of the Centers for Medicare and Medicaid, has signaled the administration’s willingness to accept expansion waivers that implement provisions favored by conservatives, like work requirements and substantial premiums for covered able-bodied adults, further softening resistance to expansion.

North Carolina is one of the states that seems to have been moved by Verma’s repositioning. It’s considering separate plans favored by Republicans in the General Assembly and by Democratic Governor Roy Cooper. The “Carolina Cares” plan written by State Representative Donny Lambeth is the state’s first Republican proposal to include some adults not previously covered under Medicaid, but it still bears the clear stamps of conservatism. It imposes substantial premiums and a work requirement, while also providing insurance to vulnerable rural residents. In an email statement, Lambeth was adamant that the structure would not pass costs to taxpayers, but would instead split them among providers and beneficiaries, saying “this option is a win-win for the patients, the State, the providers of care and for the taxpayers of North Carolina.”

It’s unlikely Cooper and state Democrats will agree to that plan as-is, but if conservative-leaning Medicaid expansion plans take hold in state legislatures, it might endanger the White House’s apparent strategy of stepping back to allow the ACA’s problems to compound on their own. Perhaps to counter the likelihood of the tide turning in favor of the expansion among the remaining states, the administration announced last week that it would help defray some of the uncompensated care costs for uninsured patients in Florida by increasing the state’s federally-backed low-income pool from about $600 million to $1.5 billion. The funds don’t come close to offsetting the missed funding from Medicaid, but they appear to be enough to tide Florida over—at least until the next renewal.

In doing so, the White House is signaling that it is backing off one of the key negative pressures the Obama administration used to push some states towards accepting the Medicaid expansion. The low-income pool (LIP) program started as a limited CMS demonstration in 2006, and quickly evolved into a slush fund to backstop state spending to care for people who were left uninsured. But after the ACA, President Obama refused to provide funding via LIPs for people who would be insured under Medicaid by the ACA’s expansion standards, meaning the funding for the non-expansion states that had been participating in the demonstration project plummeted. Trump’s decision puts increased funding back on the table for demonstration states that continue to hold out on Medicaid.

“There were a number of states that had a low-income pool,” says Robin Rudowitz of the Kaiser Family Foundation. “They were all subject to CMS guidance around restructuring their pools at the same time that Florida was. So presumably if there’s a change in the interpretation for Florida, some of these other states might also seek a change.” While there are only four non-expansion states in the LIP demonstrations, the two participating states of Kansas and Tennessee are vulnerable enough for the signal from the White House to matter immediately in Medicaid expansion decisions. The remaining two states—Texas and Florida—are home to 40 percent of all the Americans now caught in the “coverage gap” without any form of affordable coverage.

Texas’s LIP renewal is up next. Its conservative government seems unlikely to expand Medicaid, although a Trump bailout via the demonstration grant would give the state budgetary room to cut state spending on Medicaid. Even though relatively few states participate in the LIP program, signals matter—and the White House is signaling that it’s interested in paying states to bury Medicaid expansion plans. For the White House, a continued stalemate might be the closest thing to a win.

How to Stop Medicaid Expansion – The Atlantic
Robert Green May 4, 2017 Medicaid News