The U.S territories – American Samoa, the Commonwealth of the Northern Mariana Islands (CNMI), Guam, Puerto Rico, and the U.S. Virgin Islands (USVI) – have faced an array of longstanding fiscal and health challenges that were exacerbated by recent natural disasters and most recently by the COVID-19 pandemic. Differences in Medicaid financing, including a statutory cap and match rate, have contributed to broader fiscal and health systems challenges for the territories. While additional federal funds have been provided over the statutory caps, these funds are set to expire at the end of September 2021. Congress is currently debating legislation to address the looming Medicaid funding cliff. This brief builds on data in an earlier brief released in May 2021 examining the effects of the pandemic and the implications of the fiscal cliff and incorporates findings from a questionnaire sent to Medicaid Directors in territories in the summer of 2021. Three territories (CNMI, Puerto Rico, and USVI) responded to the questionnaire.

How is Medicaid funding in the Territories different from the states?

Unlike in the 50 states and D.C., annual federal funding for Medicaid in the U.S. territories is subject to a statutory cap and fixed matching rate. Both the capped federal allotment (known as the Section 1108 allotment) and the territories’ federal matching rate (known as the federal medical assistance percentage, or FMAP) are fixed in statute. This funding arrangement is unlike federal Medicaid funding for states where federal dollars are uncapped and the FMAP is adjusted annually based on a state’s relative per capita income. Once a territory exhausts its capped federal funds, it no longer receives federal financial support for its Medicaid program during that fiscal year. This limit on federal Medicaid funding ultimately risks coverage for patients and places financial strain on the territories’ health care systems and providers, including health centers, that continue serving Medicaid patients, even if the federal funding to support the costs of those services is no longer available.

Over time, Congress has provided increases in federal funds for the territories broadly and in response to specific emergency events. Temporary funding can provide short-term relief, but also create fiscal funding cliffs that require ongoing Congressional action. The allotments for each of the territories for FY 2020 and FY 2021 are around seven to nine times the statutory levels as a result of additional funding added in the FY 2020 appropriation package and the Families First Coronavirus Response Act (FFCRA). In addition to adding funding above the statutory caps, legislation also increased the federal match rate, which reduces the amount that the territories needed to contribute to access the federal funds. If Congress does not act, Medicaid funding will revert back to the statutory allotments resulting in sharp declines in federal funds and significant funding shortfalls unless spending is dramatically reduced (Figure 1). 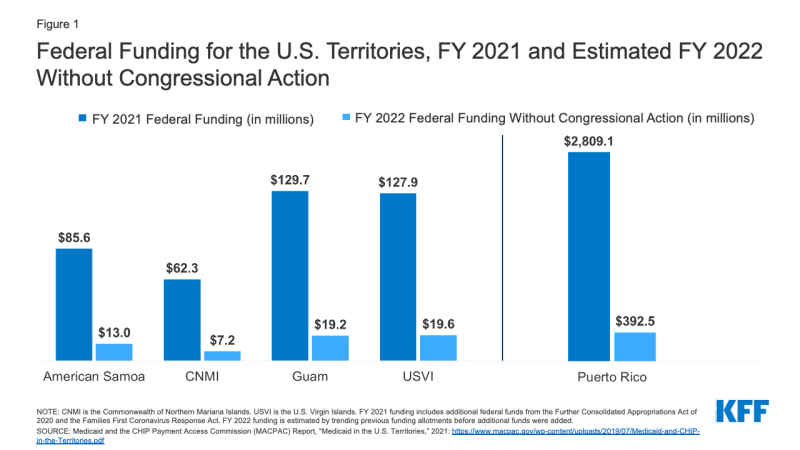 What are implications of the Medicaid fiscal cliff?

In the fielded questionnaire, territories reported using the increases in Medicaid funds to support enrollment, provide benefits, and increase provider rates. For example, increases in federal Medicaid funds allowed Puerto Rico to temporarily increase eligibility thresholds from about 40% of the Federal Poverty Level (FPL) to around 85% in 2020 (resulting in about 200,000 additional Medicaid enrollees). Increased federal funding was also used to increase payments rates to physicians and hospitals and to cover Hepatitis C treatments in Puerto Rico. USVI used increased funds to implement a personal care attendant (PCA) program and a hospice benefit, to expand their Part B dual eligible coverage program, and to extend post-partum coverage to 12 months. Even with increased funding, Puerto Rico noted that there were not enough funds to provide services that are mandatory in the states like non-emergency medical transportation (NEMT), long-term services and supports (LTSS), and diabetes supplies.

Every territory responding to the questionnaire reported that they would need to make significant program changes to eligibility and benefits with the loss of federal funds. One Medicaid Director reported that the Medicaid fiscal cliff would have a “devastating negative impact” on the health care system. All Medicaid Directors reported that the territories would not be able to fill the funding gaps from the loss of federal Medicaid funds with local funds. For example, Puerto Rico would need to roll back recent eligibility and provider rate increases. USVI noted that they would be required to reduce income eligibility across all categorical enrollee groups, cut optional benefits such as dental services, cut provider payment rates, and roll back recent increases in coverage and benefits. CNMI stated that payments to their safety net hospitals would be affected by the decreased funding. The territories noted that reduced federal Medicaid funding would exacerbate long standing problems in attracting and maintaining providers and would also hamper efforts to continue to respond to the COVID-19 pandemic. While the territories have had varied experiences with the COVID-19 pandemic to date, the future is uncertain with the spread of the Delta variant. Recent data shows that some territories have seen a spike in cases, with Guam and Puerto Rico both seeing significant increases in cases over the past two weeks (around 30% in Puerto Rico and over 250% in Guam) as of August 23, 2021.

Congress is considering proposals to avoid the upcoming Medicaid funding cliff. The Supporting Medicaid in the U.S. Territories Act of 2021 (H.R. 4406) was approved by the House Energy and Commerce Committee in late July 2021. This bill would extend funding for the territories (for five years for Puerto Rico with a 76% FMAP rate and for eight years for the other territories with an 83% FMAP rate).

However, temporary funding measures would not address the long-term Medicaid financing issues. The territories have long advocated for a permanent change in Medicaid financing that would treat the territories more like states by eliminating the funding cap and by calculating the match rate based on relative per capita income. Such changes would increase the stability and predictability of Medicaid funding year to year. While temporary measures would avert the upcoming fiscal cliff, it would create another fiscal cliff in the future and make it difficult to address long-standing issues in the overall health care system.