Presented by the Partnership for America’s Health Care Future

— Just 13 states have yet to move forward on Medicaid expansion after Kansas leaders announced a deal to do so.

— A ban on menthol tobacco is gaining steam in Congress despite longstanding concern about the unintended consequences on African Americans.

— A three-judge panel seemed wary of lifting a freeze on President Donald Trump’s insurance mandate for legal immigrants, although the lone Trump-appointed judge on the panel questioned the need for a broad freeze.

A message from the Partnership for America’s Health Care Future:

Every American deserves access to affordable, high-quality health care. It’s time we build on what’s working in our health care and fix what’s broken – not start over with a one-size-fits-all, new government health insurance system we can’t afford. Learn More

THANK GOODNESS IT’s FRIDAY PULSE — Where another football weekend brings mixed emotions for your author. On the one hand, the NFL’s physical toll is relentless, as detailed by this Slate piece on retired great Rob Gronkowski’s chronic pain. On the other hand, Lamar Jackson is just so exciting. And after years of extensive reporting on health risks, don’t all players know what they’re getting into?

PULSE will ponder the ethical conundrum while watching the Ravens game. Pass moral judgments and other tips to ddiamond@politico.com.

THE MARCH TOWARD MEDICAID EXPANSION CONTINUES — Kansas leaders on Thursday announced a deal to expand the safety-net health program, after years of near-misses. Gov. Laura Kelly, a Democrat elected in 2018, had vowed to find a compromise to cover the estimated 150,000 state residents in the coverage gap.

The deal still needs to navigate the state legislature, but it has the support of top Republicans. “My top priority is to lower the cost of healthcare for Kansans across the board. We want to give as many Kansans health care coverage as we can, in the Medicaid market and the non-Medicaid market,” said Jim Denning, the GOP state Senate majority leader — and a longtime critic of Medicaid expansion.

— Kansas would be the 37th state to expand Medicaid. Another way to put that: As Obamacare’s 10-year anniversary approaches in March, nearly three-quarters of states have now said yes to its Medicaid expansion. (The expansion was originally mandatory before the Supreme Court in 2012 ruled that states could choose to opt in.)

— PULSE’s question: Is there any reason to believe that expansion isn’t inevitable, nationally? Opposition has long been ideological, above all else: Of the 13 states besides Kansas that haven’t expanded Medicaid, 11 are led by Republicans, and the other two have GOP-led legislatures that have stymied expansion efforts. There’s also a financial argument: Conservative critics of expansion have recently argued that the initiative has worsened the Medicaid program and led to cost overruns.

But if Medicaid expansion can move forward in Kansas, which has been among the nation’s more conservative states in recent years, it can presumably succeed in other GOP strongholds. Leaders in Mississippi have quietly explored expansion; voters in Oklahoma are moving to get the issue on this year’s ballot.

— Medicaid advocates argue that expansion means more funding and fewer preventable deaths. Lauren Beatty, a spokesperson for the Alliance for a Healthy Kansas, told PULSE that the state has forfeited an estimated $3.7 billion in federal funds — at least — by failing to opt into Obamacare’s expansion. “A number that grows by $1.8 million each day,” Beatty added.

The alliance also estimates that 288 lives were lost between 2014 and 2017 because of failure to expand Medicaid in the state, Beatty said, citing recent analysis from the Center on Budget and Policy Priorities.

MENTHOL BAN GAINS STEAM AMONG BLACK LAWMAKERS — House leaders say they are likely to bring up the ban later this year as part of a push for further tobacco regulation, POLITICO’s Sarah Owermohle reports, and they’ve got some African American lawmakers on board.

— For years, the industry has warned of unintended consequences of a menthol ban. Opponents had long argued that a ban on menthol cigarettes would single out black smokers and lead to over-policing of black communities, where menthol constitutes a disproportionate share of the tobacco market.

But the over-policing argument is industry rhetoric, said Valerie Yerger, a health policy expert at UCSF and a founding member of the African American Tobacco Control Leadership Council. “They are using something very intimately tied to the emotional experience as black folks,” she said. “And that is the only argument they have.” 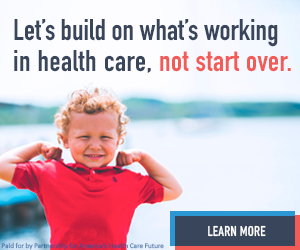 A federal judge in Oregon blocked the mandate from taking effect nationwide in November, saying that the president’s proclamation — requiring legal immigrants to obtain health insurance or prove they could cover their health costs — could affect about 60 percent of all immigrant visa applicants. The Trump administration wants the 9th Circuit to lift the freeze while a legal fight on the underlying policy continues.

— One of the judges on the 9th Circuit panel, Marsha Berzon, a Bill Clinton appointee, criticized DOJ claims that uninsured immigrants load uncompensated care costs onto the U.S. health system, saying the amount of charity care immigrants consume is “something miniscule.”

But the panel’s Trump-appointed judge, Daniel Bress, questioned if a broad freeze on the policy was appropriate, because immigrants and their families who are challenging the mandate have yet to secure class action status, which would help justify a nationwide injunction, Susannah writes.

“Organ procurement organizations are proud to help facilitate these gifts and to see that efforts to improve and increase donation are paying off in more lives saved,” said Kelly Ranum, the association’s president and CEO of Louisiana Organ Procurement Agency.

— Organ procurement organizations have been under fire from critics who say that the groups have failed to recover thousands of viable organs even as more than 110,000 people are on the organ-transplant waiting list.

A message from the Partnership for America’s Health Care Future:

We’re committed to working towards solutions to lower costs, protect patient choice, expand access, improve quality and foster innovation, but whether it’s called the public option, Medicare buy-in or Medicare for All, one-size-fits-all government health insurance systems will never allow us to achieve those goals.

We should work together to lower costs for every American instead of creating a new government health insurance system that would force American families to pay more to wait longer for worse care. Learn More

ALLIANCE FOR HEALTH POLICY names new board members. Adaeze Enekwechi, president of IMPAQ, and Ronald Williams, chairman and CEO of RW2 Enterprises, were elected to serve as members on the organization’s Board of Directors.