Republican leaders in the Kansas House say it is unlikely they will schedule another vote on Medicaid expansion in the final weeks of the legislative session.

But Democrats say they will attempt to force one.

“The conversation is not over. There will be another initiative to expand Medicaid, but my best guess is that happens next year, not this session,” Hineman said Monday.

Getting a veto-proof majority for an expansion bill would require some changes to garner support from more conservative lawmakers, Hineman said. Likely changes would include adding a work requirement as well as specific language to prohibit any expansion funds from going to Planned Parenthood, a women’s reproductive health care organization.

Waiting until next year would give lawmakers time to make those changes and to get a clearer picture of whether President Donald Trump and the Republican-controlled Congress will allow more states to expand Medicaid under rules established by the Affordable Care Act that obligate the federal government to cover no less than 90 percent of expansion costs. 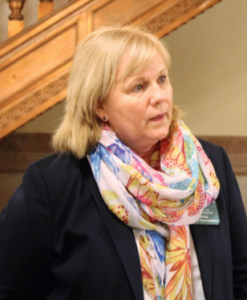 “I think for the majority party, that’s the preferred approach,” Hineman said.

“I’m not giving up,” Concannon said Monday, adding that she believes the work done this year makes it more likely lawmakers will pass an expansion plan next year.

“We got it further than I ever anticipated,” she said.

Democrats aren’t ready to throw in the towel, said House Minority Leader Jim Ward of Wichita, who appeared with Hineman on the podcast.

“We are going to do everything in our power to get another vote on Medicaid expansion,” Ward said, charging that five Kansas hospitals are in danger of closing without the additional federal matching funds that expansion would provide.

If Democrats succeed in forcing another vote, it isn’t clear the outcome would be different.

During the Legislature’s recent spring break, the Alliance for a Healthy Kansas, a nonprofit coalition spearheading the lobbying campaign for expansion, staged town hall meetings in the districts of several lawmakers considered potential swing votes, including the Ottawa district of Republican Rep. Blaine Finch.

Standing in the back of the room, Finch listened as advocates touted the health and economic benefits that an influx of federal Medicaid matching dollars would generate. 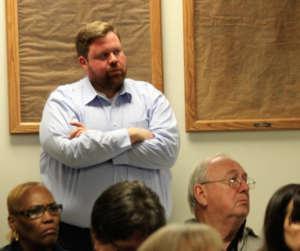 “Probably like most things, the truth is somewhere in between,” Finch said. “The fact that projections may show something down the road doesn’t mean those are dollars in hand and so we have to be very careful when the state is $900 million underwater.”

David Jordan, director of the alliance, said many of the lawmakers questioning the numbers are seeking cover to avoid acknowledging that they are opposed to expansion for strictly political reasons.

“They are not citing factual information,” Jordan said. “We need to make a final push. I think it’s realistic to think that the Legislature could still do the right thing and expand KanCare.”

KanCare is the name given to the state’s Medicaid program when the Brownback administration privatized it in 2013.

The bill vetoed by Brownback would have expanded KanCare coverage to an estimated 180,000 adults earning up to 138 percent of the federal poverty line, or about $16,640 annually for an individual. Many of those who would gain coverage are uninsured working adults.

Jim McLean is managing director of the Kansas News Service, a collaboration of  kcur.org, Kansas Public Radio and KMUW covering health, education and politics. You can reach him on Twitter @jmcleanks.