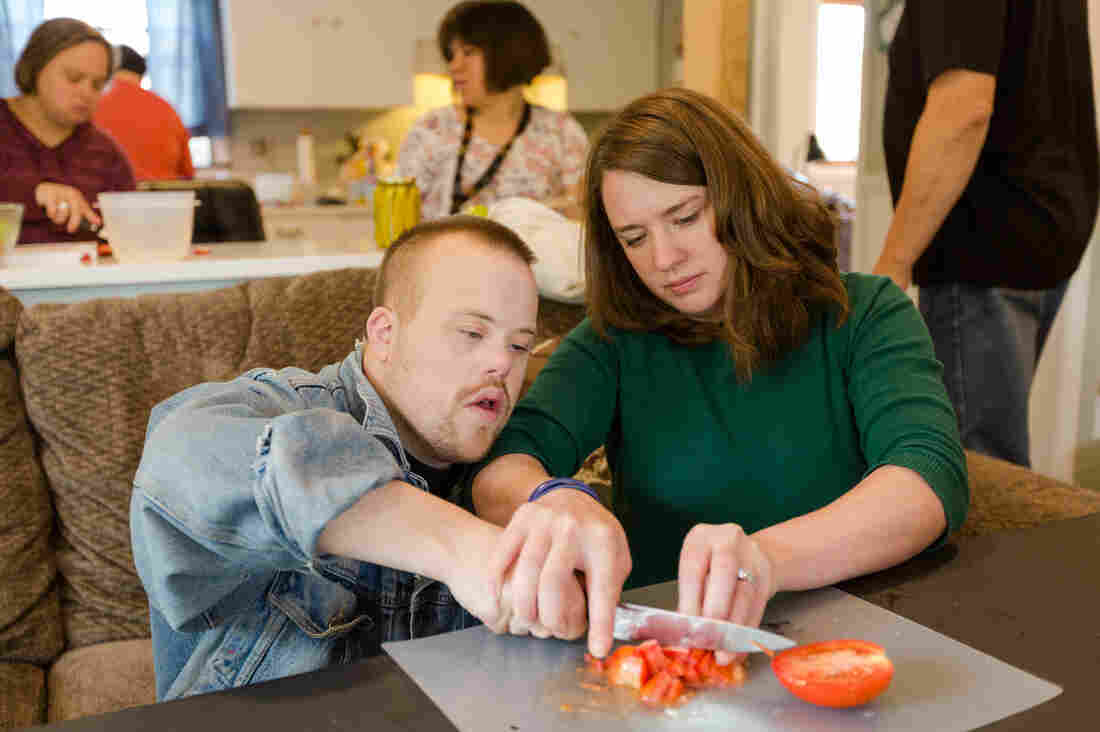 Justine Orr (right), program manager for Our Place Day Services, helps David Breuer chop tomatoes during a cooking class at the center north of Milwaukee. Nearly all the center’s clients pay for services with funds from Medicaid.

It’s morning meeting time at Our Place Day Services, a day center for adults with disabilities, housed in a small concrete and glass building on Lovers Lane in Slinger, Wis.

About 30 people are gathered here, around a long table, reciting the pledge of allegiance. One man paces alongside the table, another sits in a wheelchair a few feet away. There’s a woman holding a baby in her lap and a friendly dog — a goldendoodle — wandering around greeting people with a sniff and a lick.

A modest operation based north of Milwaukee, on Interstate 43, Our Place serves as a safe place for people with severe cognitive disabilities to spend their days and learn news skills while the family members who usually care for them are at work.

Clients at Our Place can participate in fun activities — do art or go bowling with staff from the center — and they also work on specific skills like money management or cooking. The center provides the sort of crucial support services that many people are concerned will no longer be offered if Republicans proceed with their planned cuts to Medicaid.

On this Monday morning the clients at Our Place are sharing their goals — big and small. One man wants to finish a mosaic he’s working on, while a woman down the table says she hopes to go to the movies with a friend someday. 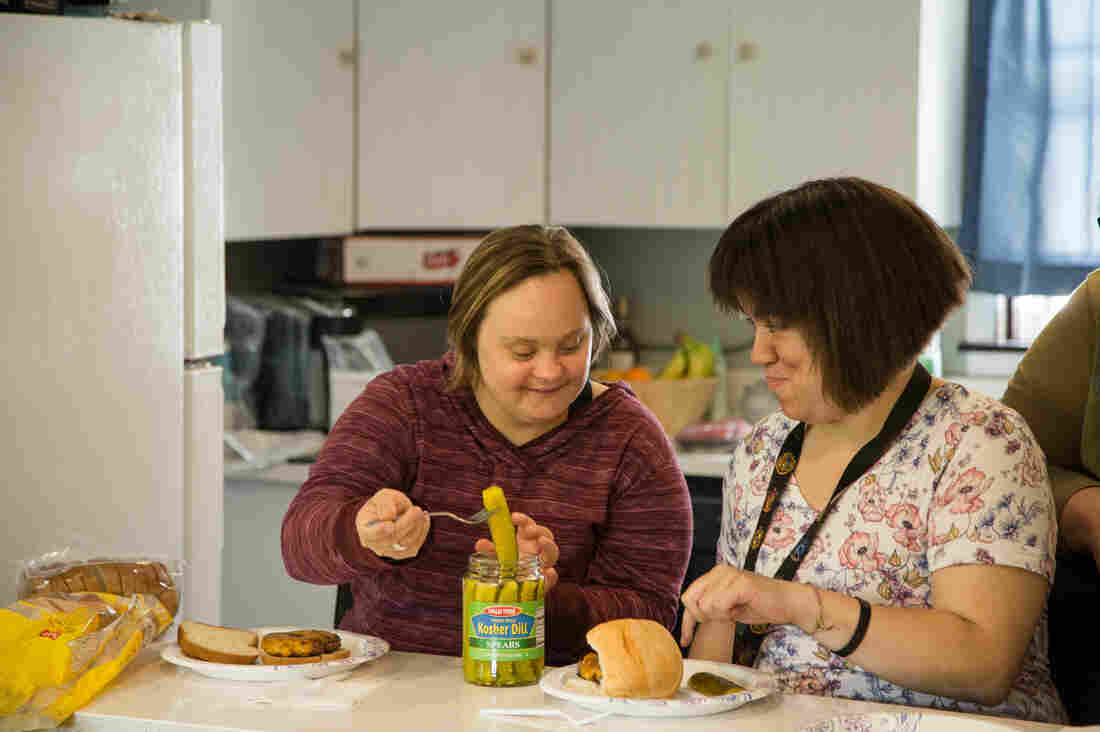 Danielle Wirsbinski (left) and Melissa Rodriguez prepare their lunch together during the cooking class.

“To have a job, to do more volunteering, learn new skills, talk …. taking classes, go to school, to live on my own,” she says.

Another group member, Eric S. (who asked that we not use his last name because he’s not comfortable going public about his condition), describes the work he’s doing to be able to live on his own someday.

“Learning how to cook with Justine. Justine teaches me how to shop,” he says, referring to Justine Orr, a staffer who works with him at Our Place. “I learn how to clean with Justine and I did safety skills in the home.”

But she’s worried about the Republican plan to overhaul Medicaid.

All but one of her 33 clients pay for their classes and care at Our Place with Medicaid dollars. Wisconsin’s Medicaid system includes a program called IRIS that grants people with disabilities a budget, based on their level of need, to use for services that help them live in the community.

The state’s approach is part of a national trend in recent decades to move people with severe developmental disabilities out of institutional settings by providing the support they and their families need to live more independently – either with their families, in community-based group homes or even on their own.

“Many of our people are interested in having their own apartment someday, and are living with their parents now,” Ellenbecker says. “They really need some help with the everyday skills of cooking and cleaning and doing the things that everyone else does to be able to live independently.”

President Trump and Republicans in Congress want to restructure the way Medicaid is funded. Instead of paying for all the medical care and services beneficiaries need, the health care bill Republicans passed through the House last month would grant each state a fixed sum per beneficiary based on what the state has spent in the past.

That per-capita allowance would increase over time, but at a slower rate than health care costs generally rise. So the Congressional Budget Office estimates that Medicaid funding under the plan would be 25 percent less in 10 years than it would be under current law.

While Medicaid is best known as a health care program for poor people, more than 80 percent of its budget goes to care for the elderly, children and people with disabilities, according to the Kaiser Family Foundation. Only 15 percent goes to health care for able-bodied adults, the people that Mulvaney was likely referring to in his remarks. 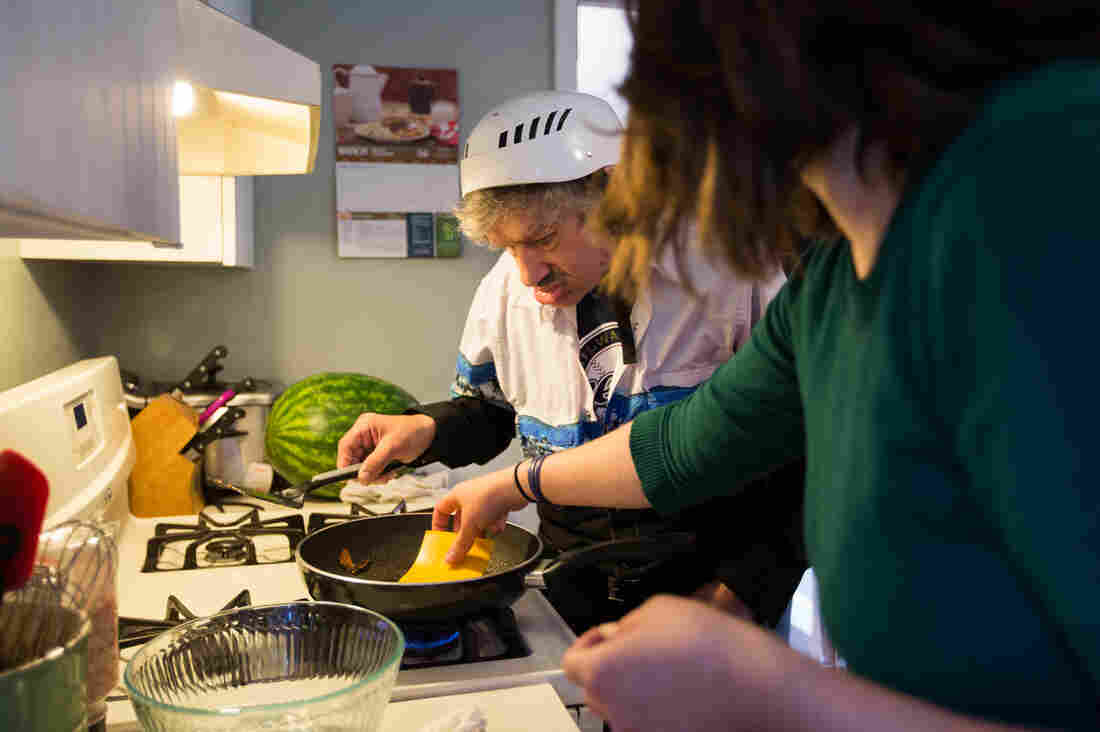 Client John Neu (left) learns to make a cheeseburger with tips from Justine Orr. Our Place Day Services also teaches clients many work skills, how to manage money and how to be more independent socially.

The program has been growing in recent years and it now makes up almost 10 percent of federal spending. That’s why it’s the top target in President Trump’s proposed budget, and figures prominently in the House Republican proposal to replace the Affordable Care Act, also known as Obamacare. Some estimates suggest the program could be cut by more than a trillion dollars over 10 years.

But some Republicans in the Senate, who are now hammering out their own plan to replace Obamacare, are hesitant to make such big cuts to services for the poor, elderly people and those with disabilities.

The people who come to Our Place each day aren’t likely to be among those who can “get off” Medicaid. They’re likely to need care and support services for their entire lives.

Ellenbecker describes how her program helps people engage in the community.

That everyday joy has a number of steps — you have to figure out transportation, money, movie times and simply how to choose a seat in a theater.

To navigate all that, the woman who’d listed going to a movie as one of her goals “would need somebody to come with her to help her with all of those things,” Ellenbecker says, “because she doesn’t have the skills to be able to do it independently right now.” 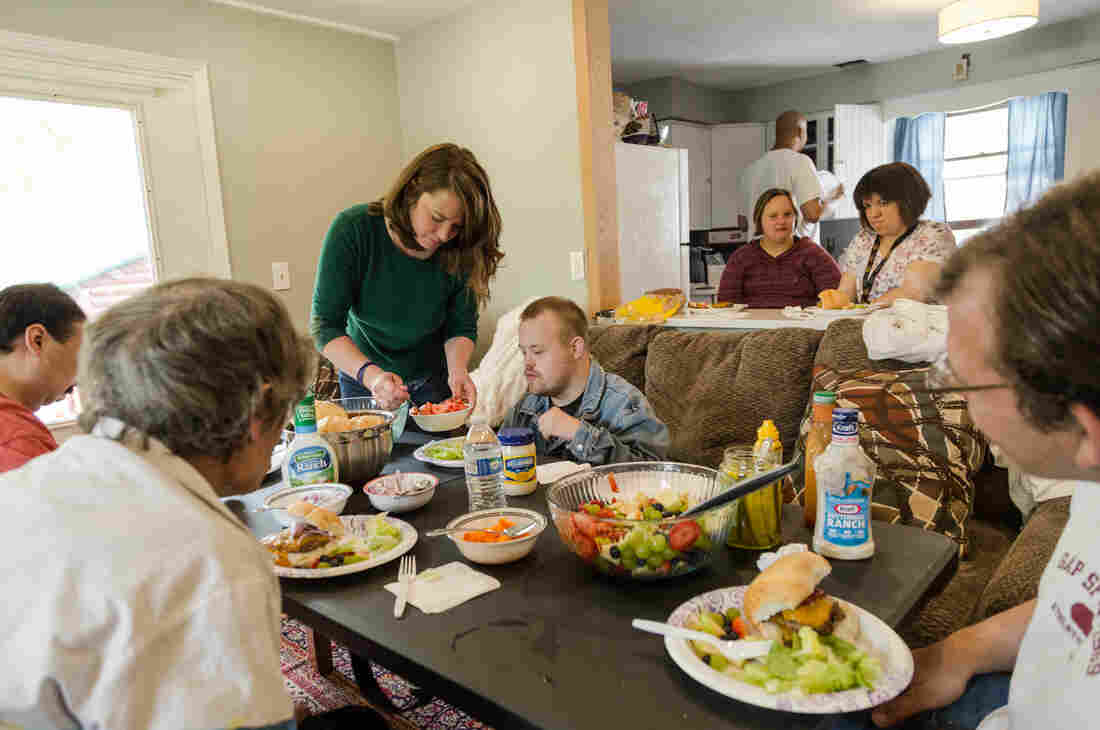 Orr helps serve the lunch Breuer and other day center clients prepared during their cooking class.

Other group members benefit from a job coach who can help them learn how to find and do a job, or keep one. Others need help managing money, cleaning their homes or getting to work. And other clients have even more basic needs, such as personal care and help with eating.

Ellenbecker worries that if the current Republican plan is passed, or the kinds of budget cuts Trump is proposing go through, the money for those support services just won’t be there.

That’s because many support services are considered optional under the law that governs Medicaid. So, if state lawmakers are forced to choose between say, job coaches, and traditional medical care, the job coaching is likely to lose out.