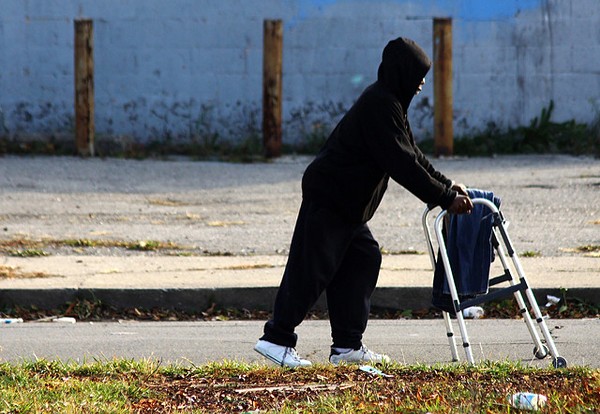 As we reported earlier this week, a Republican-sponsored bill that would require many Michiganders receiving Medicaid to work 29 hours a week to keep their benefits includes a seemingly discriminatory provision. People who live in counties with an unemployment rate of 8.5 percent or more are exempt from the work rules, but people in high-unemployment cities like Detroit and Flint are not. The counties that would be exempt are overwhelmingly white. The cities are predominantly black.

Now, thanks to a data analysis by the Washington Post, there’s evidence that the exemption would benefit white people almost exclusively.

Under the bill, work-related requirements would apply to about 700,000 people — most of them being enrollees of Healthy Michigan, the Medicaid expansion program created for certain people under 64 under Obamacare. According to the Post, 23 percent of those people are African American and 57 percent are white. And yet, the Post found that African Americans make up just 1 percent of the total pool of people who would qualify for the underemployment exemption. By contrast, 85 percent of people who would qualify are white.

We reached out to each of the 11 Republican senators behind the legislation this week in an effort to learn whether the provision was intentionally designed to discriminate against black people. Most did not return our calls or emails. The offices of Sen. Patrick Colbeck and bill sponsor Sen. Mike Shirkey said the lawmakers would not be available by our deadline.

Shirkey appears to have discussed the provision with media only once, telling the Detroit News, “I mean, is it too much of an expectation to look for jobs if you happen to live in Flint, to look for a job in Genesee County? And the same argument applies to Detroit and Wayne County. How granular do you want to get?”

Shirkey represents the Jackson area, so perhaps he’s unaware that Detroiters pay some of the highest car insurance rates in the country and, as a result, often don’t have cars they can legally drive to get to work. Or maybe he thinks Wayne County has a robust transit system on which those non-driving people can rely (it doesn’t).

We sure would like to hear more from Shirkey on why he crafted this proposal to help counties rather than cities. As the Washington Post pointed out, other assistance programs that come with work rules can provide exemptions for a variety of areas with high unemployment. The Supplemental Nutrition Assistance Program, or SNAP, reportedly allows states to apply for waivers for high-unemployment counties, cities, or Indian reservations.

A Michigan House Democrat who’s a proponent of Medicaid and universal healthcare this week described what he sees as the real rationale behind the exemption.

“They have this belief that there’s this massive group of people that are abusing the system,” said Rep. Yousef Rabhi (D-Ann Arbor). “Quite frankly, I think if we’re going to break it down a little bit, I think much of that belief that’s held by folks is based on racism.

The work rules bill has passed the Senate and is in committee in the House.

Gov. Rick Snyder has indicated he’s open to instating work-related requirements for Medicaid recipients. His office said Tuesday that he’s working with the bill sponsor on language and would not approve the legislation in its current form. Snyder’s office did not comment specifically on the exemption provision for counties with high unemployment.

Stay on top of Detroit news and views. Sign up for our weekly issue newsletter delivered each Wednesday.