Mississippians concerned with the pending health care bill in the U.S. Senate gathered outside the Jackson offices of Sens. Thad Cochran and Roger Wicker, as well as speaking with staff members about their concerns.
Sarah Fowler/The Clarion-Ledger

Mario Henderson leads chants of “save Medicaid,” Thursday as other social service activists, Medicaid recipients and their supporters stage a protest outside the building that houses the offices of U.S. Sen. Thad Cochran in Jackson. About 35 participants began the morning with a protest at Cochran’s office, while sending some representatives to meet with his staff. By mid afternoon, the same group continued their outdoor protest at the federal courthouse where U.S. Sen. Roger Wicker maintains offices.(Photo: Rogelio V. Solis, AP)

The chants filled the air in downtown Jackson Thursday morning:”Hey hey, ho, ho, this health care bill has got to go.”

Dozens of protesters marched outside the offices of Sens. Thad Cochran and Roger Wicker in opposition to the proposed Senate health care bill, called the Better Care Reconciliation Act.

“We are out here today to make sure everyone realizes, all of our senators and representatives that are actually representing the people, there should be absolutely no cuts to Medicaid,” said Augusta Smith, executive director of LIFE of Mississippi, the acronym for Living Independence For Everyone. “I am extremely concerned about this bill because of the cuts and the fact that their wanting to not extend Medicaid will actually kill thousands of people.”

“I think thousands and thousands of Mississippians would have a chance to get tax credits to buy better insurance,’’ Wicker told Berry. “I’m eager to see it debated.”’

“I think we very much need to proceed to the bill,’’ he said.

In a statement Wednesday, Cochran called the bill “a work in progress.” He said he would continue to work with his colleagues “to reach an agreement that benefits the nation.”

More: The who, what and how much of Mississippi Medicaid

Cindy Singletary of Biloxi said her life would be turned upside down if Medicaid received significant cuts.

Singletary suffers from complications from dwarfism and uses a wheechair. When she was a baby, her father was laid off from his job. With no insurance, multiple doctors refused to treat her.

When she was 3 years old, after being denied three times, Singletary was accepted into the Medicaid program. A doctor then realized her spinal cord was being pinched by her spinal column. Because of the delayed diagnosis, Singletary will never walk. Accompanied by her mother, Bobbie, and her service dog, Jones, Singletary told her story to the staff at Cochran and Wicker’s offices.

The media was not allowed in either meeting.

In an emailed statement, Wicker said he believed the proposed health care bill would improve the lives of Mississippians. He also maintained the bill does not cut funding to Medicaid.

“Rather than cutting funding for Medicaid — which some have falsely asserted — this plan increases the amount of money to the program at a more sustainable rate of growth than it is now,” Wicker said.

However, according to the CBO report, Medicaid spending would decrease under the Better Care Reconciliation Act.

“Medicaid spending would be 26 percent lower in 2026 than it would be under the agency’s extended baseline, and the gap would widen to about 35 percent in 2036,.” according to the The report, Longer-Term Effects of the Better Care Reconciliation Act of 2017 on Medicaid Spending.

After the meeting in Cochran’s office, Singletary said, the meeting appeared to go well but, “it’s just a question of whether or not it gets to the top dog and makes a difference.”

Singletary is a contract worker who serves as a parent adviser to students with disabilities. She often goes in schools and serves as a facilitator between the student and facility.

The complexities of Medicaid often contribute to the confusion of the program. Here, we break down some of the numbers for Mississippi Medicaid.
Dustin Barnes/The Clarion-Ledger

With the proposed health care bill, she said she is “terrified” of how it may impact her daily life.

“I do have Medicare, but that has a co-pay, that has deductibles,” she said. “I also have medicines, I have a service dog that costs money. Everything costs money. Living with a disability costs money. If you cut my insurance, I don’t know what I would do.”

Over the last several years, Singletary said she has seen the positive effects of people with pre-existing conditions being covered under most insurance plans. If that gets cut, she’s concerned how it will impact those with disabilities.

“More people with disabilities are working in the community, and I’m so terrified that that’s going to go backwards now,” she said.

She noted that many children who are on Medicaid in Mississippi have disabilities. Medicaid pays for therapy for those children.

“If the Medicaid is cut, then what are those children going to do,” she asked. “That’s one of the reasons why I’m able to work because I had therapy as a child.”

Rims Barber has been dealing with Medicaid since its inception in 1965. It was instituted in Mississippi in 1969.

Barber said it’s his understanding that 30,000 children will immediately be cut from Mississippi Medicaid if the proposed bill takes effect. In the coming years, he believes tens of thousands more will be cut.

Amelie Hahn, 39, of Jackson, was protesting Thursday with a sign made by her 19-year-old daughter, Haley, who has cerebral palsy and is a wheelchair user. 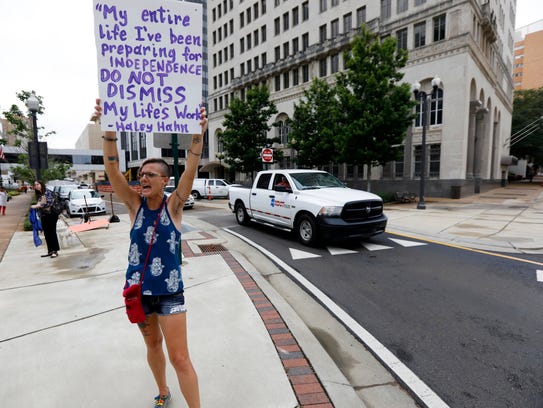 Amelie Hahn of Jackson, waves a message sign Thursday on behalf of her daughter. noting the importance of Medicaid for her continued health care, as she and other social service activists, Medicaid recipients and their supporters stage a protest outside the building that houses the offices of U.S. Sen. Thad Cochran (Photo: Rogelio V. Solis, AP)

Haley Hahn was too sick to attend the protest. Her sign, written in bold purple, proclaimed: “My entire life I’ve been preparing for independence. Do not dismiss my life’s work.”

“She has no control over any part of her body with the exception of her head. She is still an amazing, wonderful, absolutely incredible young woman who will be an asset to this state and this nation,” Amelie Hahn said.

If Medicaid funding is cut, Hahn said her daughter will likely not be able to live on her own.

Desmeon Thomas was one of four people who spoke to Cochran and Wicker’s staffs. Thomas, a wheelchair user, said, “it’s going to affect thousands and thousands of lives if Medicaid is cut in the worst way, and I don’t know if they’re really aware of that or not.”

After the meeting with Wicker’s staff, Thomas said he was doubtful his story would sway the senators’ vote.

“I’m not encouraged that things are going to change,” he said. “I feel as if they’re aware of our concerns because they did listen to what we had to say. I just didn’t get a positive vibe that they really understand how Medicaid would affect people with disabilities if the cut is made.”

Barber said he didn’t know how either senator is going to vote but, “I think we have more of a shot with Cochran than we do with Wicker.”

“Wicker seems to be dead set on just doing whatever they’re going to do, doesn’t matter what it says,” he said. “I think they need to look at what does it do to people in Mississippi. Who are some of the people? It’s those real people that they need to know about.”