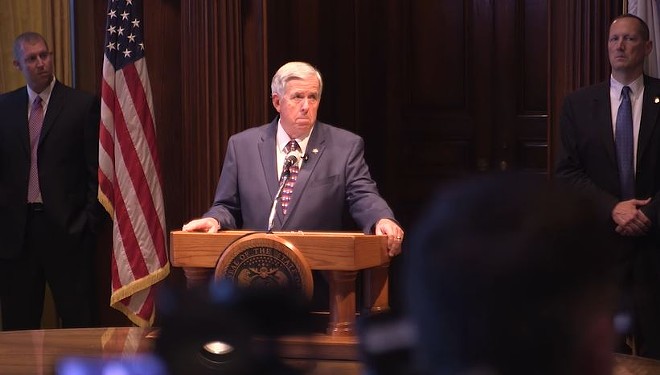 In Missouri, it’s apparently so easy to institute new restrictions on women’s healthcare affecting thousands of low-income patients that you don’t even need a signed law to do it.

Last week, Planned Parenthood of the St. Louis Region received a letter from the director of Missouri’s Medicaid Audit and Compliance Unit, the agency responsible for overseeing Medicaid programs in the state. The letter, dated June 8, notified Planned Parenthood that the state would no longer reimburse its Medicaid claims. The suspension’s effective date was the same as the one on the top of the letter — June 8.

In a way, Planned Parenthood was expecting this. The Medicaid suspension —
which blocks it from receiving funding from both the state family planning program run by the Department of Health and Senior Services and from the federal Medicaid program — was added as an amendment to the upcoming budget for the state’s Department of Social Services. The amendment states, “No funds shall be expended to any abortion facility… or any affiliate or associate thereof.”

Before that budget bill was passed on May 9, Planned Parenthood and its advocates loudly condemned the amendment, arguing that it will cut off thousands of patients from needed care. However, the bill was not among the 77 pieces of legislation signed by Eric Greitens before he resigned in disgrace last month.

Earlier this week, newly-appointed Governor Mike Parson — who in the past has bragged about his pride over closing abortion clinics — confirmed to reporters that he had yet to sign the budget bill, which would go into effect July 5.

“I aim to go ahead with that legislation,” Parson told Kansas City NPR affiliate KCUR on Tuesday.

And yet, nearly a full month before the date it would go into law, the state has already begun barring Medicaid patients from using Planned Parenthood services, which include family planning care, birth control and testing and treatment for sexually transmitted infections.

Planned Parenthood declined to comment on the record about the suspension, but an official conveyed to RFT that the timing of the June 8 cut-off came as a shock. The organization knew the suspension was coming — but not a month early, and not before the governor put pen to paper.

And it’s not like the state is acting out of ignorance. The June 8 letter itself acknowledges that the budget bill, HB 2011, has not been signed, and that the Medicaid suspension does not technically carry the force of legislation.

Instead, the letter explained, the state is cutting Planned Parenthood off early over what’s essentially a bureaucratic tangle over accounting: According to the letter, June 8 is the last day that the “claims processing cycle that will be paid with the State of Missouri Fiscal Year 2018 funds.” After June 8, the letter explains, claims would be processed beginning July 5, at the start of 2019 fiscal year. Assuming that the new budget’s restrictions will be in effect by then, the agency assumes the Department of Social Services “may lack appropriation authority” to honor those claims.

But is it legal to restrict Medicaid funds weeks before the suspension becomes law, and without a signature on the legislation? Beginning Tuesday, the RFT contacted Governor Parson’s spokeswoman Kelli Jones twice seeking comment, but didn’t hear back until just before we were set to publish Thursday. She says she’ll look into it. (We’ll update this post if we learn more.)

“In many of our state’s counties, there are no OB/GYNs, and even if a county has a hospital, it may not have a maternity ward,” Dreith says. She warns that those 7,000 patients may have a hard time finding a replacement for Planned Parenthood.

“People are already struggling to access quality healthcare,” Dreith says. “We take for granted because we live in St. Louis and we think we could have all of these options available to us, but that’s not true across the state.”

The new law requires providers to have on-call two doctors with hospital-admitting privileges to handle potential complications from those abortions — even though they involve taking two pills, not surgery. In her ruling, Judge Phillips acknowledged that major complications that require hospitalization are rare, occurring in 0.3 percent of medical abortion cases. Still, she concluded that the new regulation passes constitutional muster, even if it “has virtually no benefit.”

The judge’s decision has effectively killed the chances for medical abortion services at Planned Parenthood clinics in Joplin, Springfield and Columbia. Less than a year ago, those same clinics were anticipating a historic expansion in abortion access. Now, thanks to new state laws and court decisions, patients are being turned away.