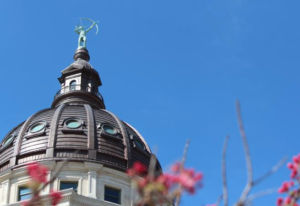 While a new poll shows that a majority of Kansans support expanding Medicaid, the Kansas Legislature is unlikely to take up the issue again this session, according to some political experts. Lawmakers primarily are focused on a tax and budget plan.
FILE PHOTO / KANSAS NEWS SERVICE

Another poll has found strong majorities of Kansans support expanding Medicaid, but some political experts say it isn’t likely to make a difference this legislative session.

The American Cancer Society’s Cancer Action Network and the American Heart Association commissioned the poll, which was released Monday.

Both legislative houses passed a Medicaid expansion bill earlier this year, but Gov. Sam Brownback vetoed the bill, saying it would prioritize non-disabled people. Disability rights groups objected to that line of argument, but the House failed to override the governor’s veto.

Talk about another attempt has simmered since, but it isn’t clear if supporters can muster the votes.

Despite the polling numbers and supporters’ determination to push Medicaid expansion again, a change isn’t likely to happen this year, said Burdett Loomis, a professor of political science at the University of Kansas. Lawmakers have too much on their plates as they try to balance the budget and find more money to fund schools, he said.

“Now it’s a question of, ‘Do you have time and energy at the end of this difficult session?’” he said. “My guess is the answer is no.”

But Hilary Gee, Kansas government relations director for the American Cancer Society’s Cancer Action Network, said the latest poll is “more evidence” that voters support expansion. It also shows voters are engaged in the issue and think it has momentum, she said.

“Several legislators who voted against expansion previously stated they wanted to find a solution,” she said. “Now we definitively know that voters would like to see an expansion solution as well.”

Previous polls released in January, March 2016, February 2014  and February 2013 all found more Kansans supported expanding Medicaid than opposed it, but this session was the first time the issue made it to a vote in the Legislature.

During the 2010, 2012 and 2014 elections, candidates who opposed anything associated with Obamacare — as the Affordable Care Act is commonly called — typically were among the winners, said Bob Beatty, a political science professor at Washburn University.

It was an unusual situation where the public appeared to support an idea but consistently voted for representatives who opposed it, he said.

But last fall Kansans elected more moderate Republicans and Democrats to the Legislature, which sent a message about support for expansion, Beatty said.

However, conservative Republicans who kept their seats generally came from districts where being associated with Obamacare would be politically perilous, he said, giving them little incentive to change their votes.

“They survived 2016, so their districts are probably OK,” he said. “Some conservatives and Republicans have been very successful at linking Medicaid expansion up to Obamacare.”

Opposition to former President Barack Obama may become less politically compelling under the administration of President Donald Trump, Beatty said, so voting against expansion may no longer be a winning position in 2018. It isn’t likely that Medicaid expansion will move forward this year in Kansas, however.

“Right now, reading the tea leaves, it doesn’t look like the votes are there” to override a Brownback veto, he said.

Meg Wingerter is a reporter for the Kansas News Service, a collaboration of  kcur.org, Kansas Public Radio and KMUW covering health, education and politics. You can reach her on Twitter @MegWingerter.

Poll: Most Kansans Support Medicaid Expansion; Is It Too Late For This Session?
Robert Green May 10, 2017 Medicaid News