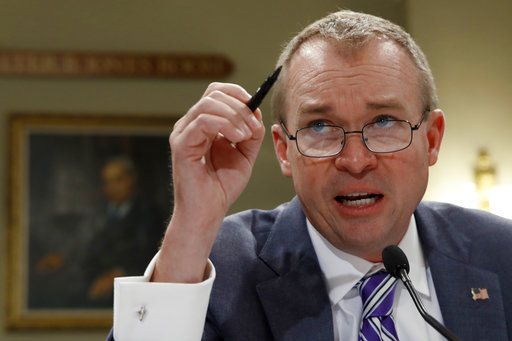 Trump’s budget director insists the administration’s spending plans won’t cut Medicaid money, but by any conventional measure of federal financing the health care program for families and the poor is clearly on the chopping block.

Mick Mulvaney, director of the Office of Management and Budget, while introducing the budget Tuesday: “There are no Medicaid cuts in the terms of what ordinary human beings would refer to as a cut. We are not spending less money one year than we spent before.”

THE FACTS: Mulvaney is being artfully evasive.

His argument is that Medicaid funding will still increase in dollar terms each year during the 10-year budget window. What President Donald Trump wants to do is merely slow the growth of Medicaid spending, he said. It’s an obvious workaround for a president who pledged as a candidate not to cut the entitlement program.

But the accounting is flawed for several reasons.

First, even before delving into the budget, the Trump-supported rollback of President Barack Obama’s health care law would reduce federal money that 31 states and Washington, D.C., have relied on to extend coverage to low-income adults under Medicaid.

Additionally, the Republican health care bill passed by the House would cap the overall federal share of Medicaid spending. The program would no longer be an open-ended entitlement, and one of the ways states are expected to respond is by restricting eligibility.

“Ordinary human beings” who can’t get Medicaid under those constraints would feel that.

The Trump budget could compound those restrictions by reducing the rate of growth in federal Medicaid funding even more. Here’s why:

One of the best ways to evaluate government spending is as a proportion of the total economy, since that can help to account for changes in population, inflation and the budget priorities that define a presidency.

So, yes, Medicaid spending would increase by $4.7 trillion over a decade. But as a proportion of the economy, it would clearly be cut.

Medicaid spending would fall from 2 percent of the economy to 1.7 percent in 2027 due to the reductions in spending projections by Trump. That slight decrease adds up to more than $600 billion over 10 years.

When it suits the administration’s case, Mulvaney relies on this same metric for measuring the budget as a proportion of the economy.

At the same briefing, talking about the plan for helping to curb the debt, he said: “It begins to reduce the size of the debt relative to the size of the economy in Year One, OK?”

While Mulvaney gets the basic measure correct, his claim about the debt relative to growth is also suspect because of the administration’s economic assumptions, which include an overly optimistic projection of economic growth.