Newly installed Kansas Gov. Jeff Colyer described his state Wednesday as vibrant but with trouble spots, telling lawmakers he plans to charge ahead at its problems. 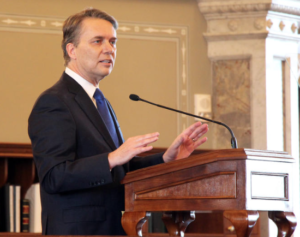 Kansas Gov. Jeff Colyer delivers his State of the State speech in the Kansas House on Wednesday. He promised to find a long-term solution to the state’s school funding problems, but was vague about what he’d agree to with lawmakers.
CELIA LLOPIS-JEPSEN / KANSAS NEWS SERVICE

The speech was effectively a State of the State speech by a former two-term lieutenant governor now one week into higher office and trying to distinguish himself from his unpopular running mate, former Gov. Sam Brownback. Brownback delivered a formal State of the State address last month.

Yet Colyer gave few specifics on the looming issue vexing legislators: how to find hundreds of millions of dollars potentially needed to bring the state in compliance with a court order to shore up its funding for local school districts.

“We must keep our schools open,” he said. Like Brownback, he called for doing so without a tax hike.

But Colyer didn’t repeat the proposed $600 million funding increase that featured in the former governor’s speech — and that drew a swift backlash from lawmakers who felt it was unattainable. Instead, he called for gradual increase.

Senate Majority Leader Jim Denning saw that as a signal Colyer is backing off of that number and letting lawmakers figure out what’s possible.

“That gives us all the assurance in the world that he trusts our work,” Denning said.

Colyer also said he wants lawmakers this year to bring him “a definitive solution that ends the school finance lawsuits for good.”

Some Republicans want to amend the state constitution to prevent courts from weighing in anymore on school funding. Colyer didn’t clarify whether that’s what he wanted.

Democratic Rep. Valdenia Winn said Colyer’s comments concerned her because the judiciary is part of Kansas’ system of checks and balances.

“He has a positive tone,” she said. “But tone is one thing — and equal opportunity before the law is another.”

Colyer has repeatedly promised to “change the tone in Topeka.” That theme featured in Wednesday’s speech, where he noted that in his first week in office, he met with Democratic leaders, signed an executive order requiring thousands of state workers to undergo annual training on preventing sexual harassment, and promised to push for government transparency.

He thanked lawmakers for proposing a slew of transparency measures in recent weeks.

“It’s time for the executive branch to do its part,” he said.

Colyer said he would cut costs for people who seek open records, improve online access to schedules and materials for public meetings, and push officials to use government instead of private email accounts.

On the state’s foster care system, which is struggling to offer refuge for children from troubled families, he pledged to hire more child welfare workers and investigators and add emergency placement options.

“So there are no more kids sleeping in offices,” he said.

He promised to fight sexual harassment and investigate and handle allegations promptly and appropriately.

“Harassment in any form, at any time, in any place,” he said, “will not be tolerated in my administration.” 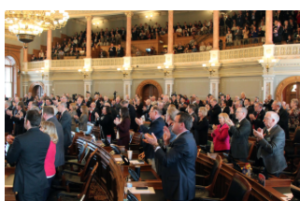 He vowed to continue Brownback’s efforts to curtail abortion and questioned court decisions that protect a women’s right to end a pregnancy.

Any argument that state and federal constitutions include a right to abortion “is violence against basic facts,” he said. “We are a pro-life state.”

He promised to launch a “My (Re) Employment” program to help job hunters polish their resumes and find high-demand fields, and to continue investing in career and technical education.

One Kansas administration after the next has underfunded the state’s pension system and diverted funds from highway infrastructure. And state revenue woes in recent years — widely blamed on Brownback’s signature 2012 tax cuts — cut into higher education and other government functions.

Colyer called for ending the the practice of borrowing from the state’s highway fund to pay for other state government services.

On the day of his speech, the Kansas Department of Commerce announced a dealthat would bring the headquarters of hospital chain HCA Midwest Health to Overland Park from Kansas City, Mo. The state said it wasn’t making the government incentives in the deal public because the contract hadn’t been finalized.

Colyer, who works for an HCA hospital as a physician, said he was not involved in putting together the package.

“I was unaware of it,” he said. “I became aware of it when I became governor.”

Celia Llopis-Jepsen is a reporter for the Kansas News Service, You can reach her on Twitter @Celia_LJ.