The Trump administration has nixed Kansas’ idea of a three-year lifetime cap on Medicaid benefits.

Gov. Jeff Colyer had wanted to include the limit in a remake of the state’s privatized Medicaid system, KanCare. He also wants work requirements for non-disabled KanCare beneficiaries. 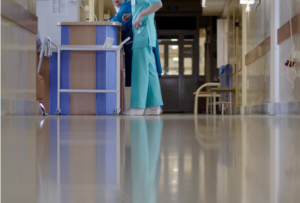 The federal government says Kansas can not put a three-year limit on Medicaid enrollment.
FILE / BIGSTOCK.COM

Late last month, he walked back his stance on pursuing a lifetime cap, while sticking by the work proposal. Both ideas had faced criticism from health care advocates who fear they would reduce poor people’s access to doctors and medication.

In a press release Monday, Colyer said the call to back off from a three-year limit came after conversations with the federal agency in charge of that program made clear the Trump administration wouldn’t allow it.

But the federal government does support work requirements for Medicaid, which Colyer highlighted as a win.

“We are pleased,” he said. “This important provision will help improve outcomes and ensure that Kansans are empowered to achieve self-sufficiency.”

The top administrator at the Centers for Medicare and Medicaid Services revealed the agency’s decision against a three-year Medicaid limit in a talk Monday to hospital administrators and in a letter to Kansas officials the same day.

That agency has granted requests from other states for certain eligibility limits on Medicaid, including work requirements.

“In every case,” the CMS wrote to Kansas health officials, “these incentive structures are designed to engage beneficiaries in ways that promote positive health and well-being.”

The advocacy group Alliance for a Healthy Kansas, which promotes expanding Medicaid coverage to around 150,000 more people in the state, applauded the federal agency’s Monday announcement in a statement that called the three-year cap “the most harmful” part of Colyer’s vision for KanCare.

It’s an “arbitrary bureaucratic time limit,” the group wrote and would risk interrupting someone’s insurance, including “in the middle of a critical course of treatment.”

Colyer, a physician and a chief architect of privatizing Medicaid in Kansas, ultimately needs to win over not just the federal government but also the Legislature to move ahead with work requirements. That’s because lawmakers passed a budget this month that blocks Colyer from doing so without their permission.

Celia Llopis-Jepsen is a reporter for the Kansas News Service. You can reach her on Twitter @Celia_LJ.