A behind-the-scenes struggle over proposed changes to Kansas’ Medicaid program is coming down to the wire.

Republican Gov. Jeff Colyer has offered concessions. But he appears determined to stick with his proposal to make some non-disabled recipients work, or undergo job training, for their health care coverage. 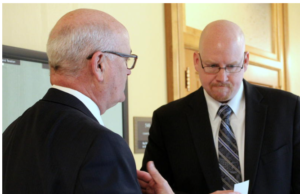 Jon Hamdorf, the Kansas Department of Health and Environment official who oversees the state’s privatized Medicaid program known as KanCare, said the governor believes “very strongly that work is a pathway to independence.”

The Colyer administration is seeking federal approval of a work requirement as part of its KanCare 2.0 proposal. That plan, submitted late last year, would extend a federal waiver that allows the state to contract with three private companies to operate KanCare, a $3 billion program that covers more than 420,000 low-income, elderly and disabled Kansans.

Historically, federal officials have rejected requirements that could deny coverage to people who would otherwise be eligible. The Trump administration wants to reverse that policy.

“We need to stop KanCare 2.0 where it is and there is limited time to do so,” said Sean Gatewood, a former Democratic legislator who now heads the KanCare Advocates Network.

Even if the House agrees with that provision, Gatewood said it may not be enough to stop KanCare 2.0 because Colyer’s line-item veto power would allow him to strike just that language before signing the bill.

If that happens it would probably be after the end of the session, meaning lawmakers wouldn’t have a chance to override the governor’s veto.

“It is appalling,” Ward said, that the voices of those legislators “are being stifled.”

In addition to the work requirement, Colyer’s KanCare 2.0 proposal would impose a lifetime benefit limit on some enrollees.

To show that he’s heard the concerns of lawmakers and stakeholder, Hamdorf said, the governor would be willing to back off his call for benefit caps if allowed to pursue a work requirement.

“There is no independent data that shows work requirements do anything except reduce the number of people who get health care,” he said.In addition to Colyer’s controversial proposals, opposition to KanCare 2.0 stems from longstanding problems with the existing program. Those problemsinclude application backlogs, payment disputes and reductions in services — particularly those that help keep persons with disabilities in their homes and out of institutions.

Hamdorf, whose efforts to address the program’s administrative problems have earned him high marks from legislators, is currently focused on clearing the application backlog. He’s put Maximus, the company that operates the application clearinghouse, on notice. If it’s not living up to the terms of its contract by June, he said, the state is prepared to assess fines that could total tens of millions of dollars.

“I’ve made a commitment to the people in this program,” he said. “We’re going to turn this around.”

Jim McLean is managing director of the Kansas News Service. You can reach him on Twitter @jmcleanks.